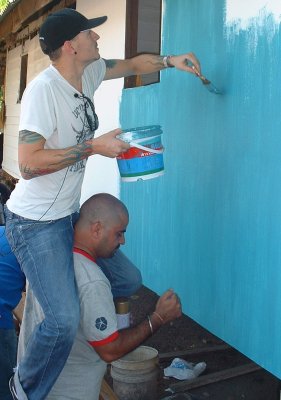 PHUKET: Chester Bennington, the lead singer of Californian band Linkin Park, visited Bang Tao beach today to see for himself the damage caused by the tsunami.

Bennington was in Phuket to record material to be broadcast by MTV in the USA, as part of a global campaign to raise money for tsunami victims.

After lunch at the Banyan Tree, Bennington and his crew headed for Bang Tao, where they spoke with local people caught up in the tsunami.

Bang Tao resident Wandee Kongtap welcomed Bennington’s visit, saying she hoped it was a sign that things would soon improve there.

Two days after the tsunami, Linkin Park – who have a large following in Thailand – established Music for Relief, a charity to raise money for tsunami victims, to which the band contributed US$100,000 (about 4 million baht).

Bennington is due to take part in an MTV Asia-organised concert in aid of UNICEF tomorrow (Thursday) at Bangkok’s IMPACT arena. Ronan Keating – who this weekend filmed a special acoustic version of “I hope you dance” in Kata – is also due to appear.

Other artistes due to perform are Good Charlotte, Kelly Clarkson, Hoobastank and Simple Plan, along with top artists from Asia.