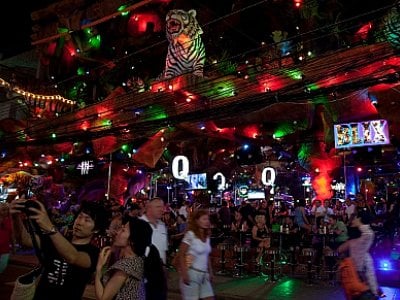 PHUKET: Soi Bangla is the number one “must see” tourist attraction in Phuket, according to the results of a recent Phuket Gazette online survey.

On December 6, the Gazette asked readers: Phuket has so many tourist attractions that most visitors to the island do not have enough time to see them all during their stays. Given this fact, which of the following Phuket tourist attractions would you rank as the number one “must see” on the island?

Overall, the most popular of the six choices was Soi Bangla, with 26.1% of the votes.

In a breakdown by demographic, Soi Bangla was the most popular reply among both Thais (41%) and local foreign residents (29%).

However, only 11% of those who identified themselves as tourists or visitors to Phuket chose the infamous walking street.

The most popular replies in this demographic were the Big Buddha image (32%), followed by more traditional destinations Chalong Temple (26%) and the Laem Phromthep scenic vista.

Despite a great deal of improvement in recent years, such as the opening of the new fresh market and the burying of power cables, Old Phuket Town fared poorly among all three groups.

If you voted “none of the above” and want to explain to other readers why, post your suggestion in our Readers’ Forum below.

If you have a photo of any of the above-mentioned places and would like to share it with other readers, email it to: news@phuketgazette.net