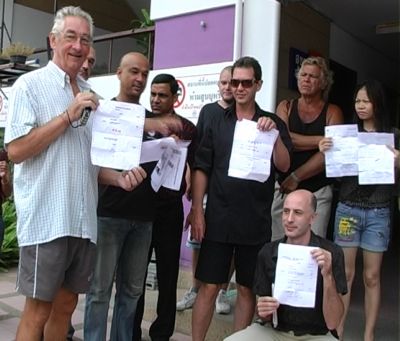 PATONG: Tenants staying at the Vises Hotel on Sainamyen Rd in Patong have filed a complaint at Kathu Police Station over an eviction order requiring them to leave the hotel by July 15.

A court notice attached to the hotel door warns that the hotel has been repossessed by Photipoom Co Ltd. The notice also warns that there is to be no damage to, sale or transfer of the assets without written permission from Punyatida Krosap of the Phuket Provincial Legal Execution Office.

About 38 long-term tenants of various nationalities jointly filed the complaint. Some had paid for their rooms two years in advance, some for a year, and some for six months. Some guests had contracts; others had only receipts for their rent payments.

The total amount of rent already paid, and that the tenants now stand to lose, is about one million baht.

However, Lt Weerapong Rakkhito explained to them that the case had already been heard in court and that they would have to hire a lawyer to negotiate their rights with the building’s owner, Photipoom Co Ltd.

Photipoom Co Ltd’s legal representative, Bandit Sirsawa, told the Gazette that Photipoom had acquired the building through another company headed by Dr Pranee Pha-eonchoke, who is also an executive at Thairung Union Car Co, at a public auction in 2003.

However, Sumitra Vassanakomut, who was working as Sales Manager at the hotel when it was sold, had stayed on collecting money from tenants, K. Bandit said.

“We offered to sell the hotel to Sumitra, who agreed in principle but made no payment,” he said.

K. Bandit said that in 2004 a case was filed against Sumitra for damages totaling 100 million baht. The court finally ruled that she was to vacate the building in December 2007, he said.

However, Sumitra ignored the judgment and continued to collect rents, keeping the issue secret from all the tenants, K. Bandit said.

He added that he had spent one day with a translator explaining to all the tenants, one by one, that they would all have to move out by July 15.

Private lawyers acting on behalf of guests are now contacting K. Bandit for documents to be used as evidence in their cases.

The tenants are also considering filing a case with the Phuket Consumer Protection Board.

Police, staff at the hotel and the disgruntled tenants all told the Gazette that they did not have K. Sumitra’s current contact details.

Sumitra also left behind an unpaid electricity bill totaling more than 400,000 baht, according to K. Bandit.

Appeal for infant in need of heart operation