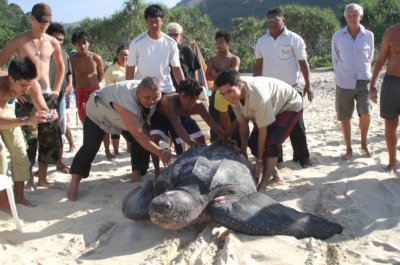 KARON: A giant leatherback turtle laid a nest of 103 eggs yesterday on Karon Beach, where a sea turtle has not been sighted laying eggs for more than 10 years.

Karon Municipality officials had the task of recovering the eggs as local villagers had taken them all in hopes of selling them as a delicacy. All but two broken eggs were recovered and taken to incubate at the Phuket Marine Biology Center (PMBC).

Ittipol Sangkaew, Deputy Mayor of Karon Municipality, explained that the eggs sell for about 60 baht each. “But after we explained to the villagers that we should let the eggs hatch so that the next generation can see real, live sea turtles – not just pictures of them – they agreed to give them back,” he said.

“When I was young I saw turtles very often, but I haven’t seen this kind of turtle for 10 years,” K. Ittipol said.

“The turtle will likely return within the next 10 days to lay another clutch of eggs. Each turtle lays between 500 and 600 eggs at a time, so we have posted security guards along the beachfront to protect the eggs and the turtle, and to allow people to watch from a safe distance as she lays her eggs,” he added.

PMBC Biologist Kanjana Adulyanukosol said that the eggs should hatch in about 60 days. “After the eggs hatch we will take care of the hatchlings for about a month before we release them back to sea, which should be at Karon Beach because it is near the open sea,” she said.

“I’m not sure if all of these eggs are healthy, however, because they were moved by people and may not hatch,” she added.

“During the past 10 years, however, fewer turtles have been laying eggs on Phuket beaches because the beachfronts have become occupied by people and businesses have been built nearby.”