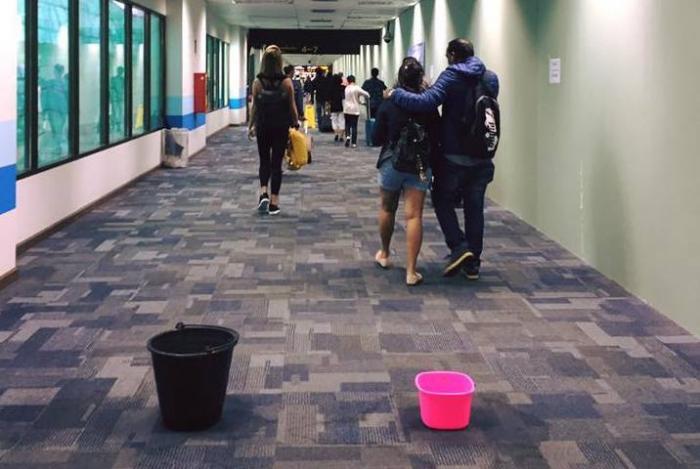 PHUKET: Pictures of plastic buckets put in place to collect water leaking from the roof of Phuket International Airport were posted on social media yesterday.

A Facebook page titled Siang Prachachon Khon Phuket (The Voice of Phuket Citizens) shared a post with the caption: “This is the condition of the walkway at Phuket International Airport. There are holes in the roof and water is leaking everywhere. We request authorities to take swift action as this is damaging to Phuket’s reputation.”

Within a 24-hour period, the post had been shared, liked and commented on thousands of times.

Airport Director Monrudee Gettuphan explained that these pictures were taken from the old terminal.

“The old terminal is currently under renovation. Ideally, we should close down during construction, but some areas need to be kept open for passengers’ use,” said Ms Monrudee.

“The pictures in the post are of the connecting walkway between the old and new buildings. We need to keep it open for use despite its condition. We apologize for the inconvenience and will take action as soon as possible. Please understand that once renovations are finished, everything will be better,” she added.

Repair work was reportedly begun this morning, but officials have yet to confirm if the problem has been fixed.

The renovation of the old terminal started on November 1 last year, and the project is ‘expected to be completed’ within 330 days (story here).