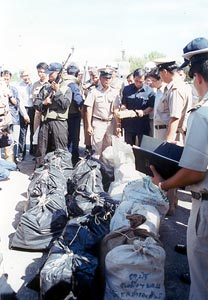 TUBLAMU, PHANG-NGA: The Royal Thai Navy recorded the largest drug bust in Thai history on Sunday, after they seized an estimated five million ya bah (methamphetamine) pills and 100 kilograms of heroin valued at more than a billion baht ($25 million). Four naval patrol boats and a Dornier helicopter from Tublamu base captured two fishing trawlers, one carrying the drugs, 130 kilometers west of the Surin Islands. The Navy arrested the 20 crew members, of whom six were Thais and 14 were Burmese. Meanwhile, in a coordinated effort, police arrested Chairat Saetan and Prateap Kaweeapiradeeroj, the two alleged financiers of the drug operation, in Bangkok. The owner of both boats, Sapachai Krajadjan was arrested in Ranong. The captain of the Chocktaweechai 5, Raksit Vinitkul, 27, from Samut Sakhon, confessed that he picked up the drugs from a Burmese boat in international waters. But the navy intercepted both vessels before the ya bah was transferred to the Chocktawatchai 4, which was to take the pills to Ranong, home port for both boats. The Chocktaweechai 5 was bound for Singapore with the 100 kilograms of heroin still on board, hidden in 44-gallon drums, Raksit added. Jurin Laksanapisit from the Prime Minister’s Office told the Gazette yesterday morning that, “This haul is even bigger than the four million ya bah tablets the police seized in Prachuap Khiri Khan last year. “The traffickers hoped to elude the police and navy whom they thought would be busy during the election period. Since our crackdown on transportation overland from factories in Burma, to the North and North-east, the traffickers were trying a new route by sea.” Jurin added.