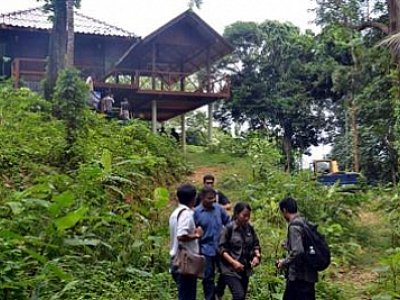 PHUKET: THE Public Sector Anti-Corruption Commission (PACC) will recommend that legal charges be pressed against 16 current and former Phuket officials, all alleged to have conspired to encroach on state forest land high in the Kamala Hills north of Patong Beach.

PACC Secretary-General Dusadee Arayawuth on Monday led his team and members of the media to the disputed site, which covers more than 200 rai.

Parts of the expanse afford impressive views over Patong Bay to the south, but the area is accessible only by a dirt road that runs off the main road to Kathu Waterfall in Kathu Municipality.

At the entrance to the site, the PACC team pointed out a wooden welcome sign heralding their arrival at what apparently was intended to become the “Honey Green View Resort”.

Nearby they noticed a large, unoccupied house still under construction and an excavator. The PACC team noted that the land had a small watercourse running through it, proving it was a watershed area.

The PACC investigators told the media that 20 Chanote title deed applications had been received for plots in the area, of which seven such deeds had already been issued based on SorKor 1 papers provided.

Among the Chanote holders were a retired former Phuket Vice Governor (three plots), a relative of a former Interior Ministry Permanent Secretary (one plot), and three other individuals (one plot each).

The retired former Phuket Vice Governor, a Phuket native, bought one of the plots from the relative of the former Interior Ministry Permanent Secretary, the PACC team said.

Investigators said a Chanote for the 48-rai plot was issued to the well-connected relative based on a report issued by the Phuket Land Office survey team, which noted that the area was used as a fruit plantation interspersed among natural vegetation.

However, the PACC team determined that the plot was on virgin forest land and concluded that the survey report was improperly issued. On this, the PACC recommended that legal action be taken.

The investigators also found that the Chanote issued to one of the plot “owners” was approved by the former vice governor and seven officers from related agencies.

A PACC press release listed 16 officers from a variety of government agencies deemed responsible for abusing their positions in the case. Among those listed are officers of the Phuket Land Office, Kathu District Office and Forestry Department.

The PACC will petition the Land Department to withdraw the deeds, but does not have the authority to order such a revocation on its own.

After the site inspection, Col Dusadee told members of the press, “We came here because we wanted to see with our own eyes whether or not the land was legally issued SorKor 1 papers.”

SorKor 1 papers bestow a right to use the land; their issuance is a common first step in the process of obtaining title deeds – legally or otherwise.

“SorKor 1 land has to have been used by the holder for some economic benefit, but the land here is part of a forest preserve and watershed… From our investigation, the issuance of SorKor 1 papers appears to have been illegal,” Col Dusadee said.

“The PACC will ask the Department of Special Investigation to pursue this matter as a special case of encroachment on protected forest land,” he said.

Meanwhile, the PACC will continue its investigation into how the seven title deeds came to be issued, he added.

Asked how the financial transactions that “leveraged” the deals might have been carried out, he said he expected much of it was done through foreign financial institutions.

Tourist fights for life after near-drowning in Phuket