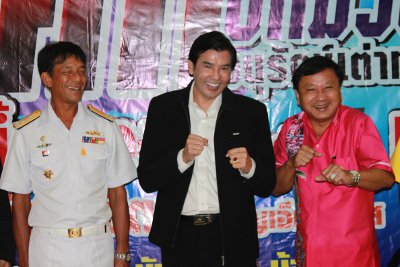 PHUKET: A World Boxing Organization (WBO) title fight will take place at Nai Yang Beach next month to raise funds for sea turtle preservation projects in Phuket and other provinces along the Andaman coast.

Phuket Governor Tri Augkaradacha, Government Spokesman Prompong Nopparit and other dignitaries announced the five-bout card that will take place in Sakoo on July 6.

The two-hour event will be televised nationally on Thai TV Channel 7 starting at 3pm.

It will not be the first time the two have squared off in the ring. Pungluang Sor Singyu (real name Panya Utok) easily defeated the Filipino in a unanimous decision the last time they fought, just last month in Nakhon Ratchasima.

Phuket Gazette boxing contributor Scott Mallon said the result should not be taken as a foregone conclusion. Migreno is a somewhat inconsistent performer who is capable of bouncing back from defeat, he said.

The event, to be held on a specially-constructed ring at Nai Yang Beach from 3 to 5pm, is expected to raise 3 million baht. Admission, however, is free.

“According to research, the reduction in the sea turtle population and subsequent decrease in nesting activity is caused primarily by commercial fishing practices,” explained Kongkiat Kittiwattanawong, who heads the PMBC’s Marine Endangered Species Unit.

Traditionally, from 5,000 to 10,000 sea turtles once nested at sites on Andaman beaches. That number has now dwindled to just a few hundred. The trend indicates that sea turtles, many species of which are already listed as “highly endangered”, could be on the way to total extinction in local waters.

The PMBC plans to use the proceeds it receives from the event to expand its satellite tracking project, in which microchips are affixed to the turtles’ shells as a way of tracking their movements.

“Through this we will gain useful information to aid our preservation project,” Mr Kongkiat said.

“We have one 60-year-old female turtle named Mae Sri Nuan that has been wearing a chip for about three months now. We want to implant more turtles with chips, at a cost of about 5,500 baht per turtle,” he said.

The boxing event undercard is as follows:

Phuket: Lord of the flies