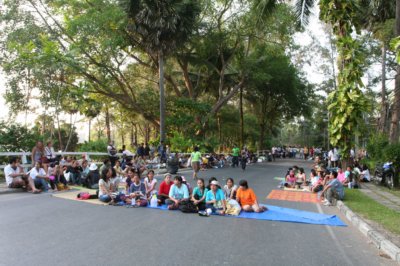 PHUKET, CHERNG TALAY: The workers’ protest at Laguna Phuket resort is now in its third day and all seven entrances into the core of the resort remain blocked by the protesters and vehicles. However, Laguna residents are still able to access their homes, but some can only do so on foot or by motorbike.

Some of the protest leaders last night met with Phuket Governor Preecha Ruangjan to explain their grievances against the resort’s management.

Members of the workers’ union are unhappy with the annual bonus that they received, which they claim was half the amount paid in previous years and is usually the equivalent to one month’s salary.

They are also unhappy that there has been no increase in annual salaries, which they had expected to rise by 4%.

Gov Preecha, who is welcoming members of the Royal Family today, is expected to meet with Laguna Director Michael Ayling later this afternoon to try to negotiate a settlement.

The Gazette has been unable to reach Mr Ayling or other members of the resort’s top management for a statement. The resort’s main switchboard has a recorded message saying that today is a national holiday.

Meanwhile the resort has begun to move some of its guests to other luxury hotels on the island, one of the protesters told the Gazette.

There is no mention of the protest on the home page of the resort’s website, though the management did issue a statement yesterday saying that only about 5% of the workers were actually involved.

Guests and residents inside the complex are being allowed in and out on motorbikes, but passage has been denied to larger vehicles. The protesters have set up tents and cooking facilities at protest sites, indicating that they are prepared to continue the protest long-term if their demands are not met.

However, the tone of the protest has been non-threatening to tourists.

Tourist Susanna Dreier from Denmark said that her group was “only mildly inconvenienced” because they had to walk in the hot sun.

A Swiss tourist seemed to sympathize with the workers, but worried about the effect on tourism.

“The protest is alright. Not too much, but a little. All people have the right to earn money, but for holiday, for tourism, it’s no good to strike so hard,” he said.

Lions gone, smiles back in at Laguna resort complex