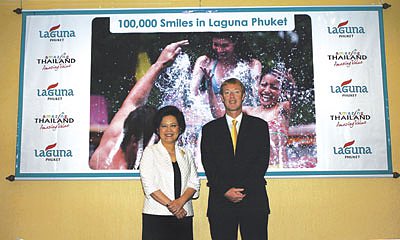 CHERNG TALAY, PHUKET: Laguna Phuket is giving away 100,000 complimentary room nights at its six resort hotels for guests who book online in March.

The “100,000 Smiles in Laguna Phuket” promotion is being run in co-operation with the Tourism Authority of Thailand (TAT), which will help to market the initiative.

The promotion represents a fightback for Laguna Phuket in the face of a tougher economic climate, coupled with a staff protest that caused widespread disruption to resort operations earlier this month.

Between February 6 and 9, a small but noisy number of employees and other activists, angry over reduced bonuses and frozen salaries, blockaded access routes to the complex, preventing holidaymakers from getting in and out.

TAT governor Ms Phornsiri Manoharn said, “In these challenging times everyone in Thailand’s tourism industry must work hard together and help each other to restore our declining tourism numbers. We really hope that this promotion brings 100,000 smiling faces to visit Thailand.”

A minimum of two paid nights are required for bookings at the Sheraton Grande Laguna during April, July, August, October, November and December.

The Allamanda Laguna Phuket resort is not participating in the promotion.

The initiative, which coincides with the launch of a redesigned Laguna Phuket website, aims to help drive traffic to the new site as well as generate bookings for the upcoming low season.

Members of the public can visit www.lagunaphuket.com/100,000-smiles and www.tourismthailand.org/thailandsuperdeal to take advantage of the offer.

Toyota Vigo winner out there somewhere