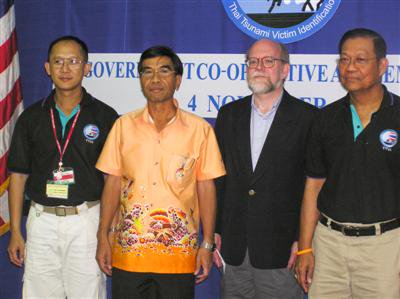 The panel has found Col Pornprasert Karnjanarin guilty of misappropriating funds and will now move to have him dismissed from the force.

Charges of malfeasance were filed against Col Pornprasert in early February last year, just two days before a resignation letter he had tendered was scheduled to take effect.

The charges followed a formal request by 13 ambassadors representing countries that collectively donated 88 million baht to help pay for the TTVI’s work in identifying and repatriating the bodies of tsunami victims.

A copy of the letter, after its initial signing by seven ambassadors, is available here.

The center, since renamed the Thai Disaster Victim Identification (TDVI) center, was later relocated from Phuket to Bangkok.

Pol Col Chaiyaporn Wannaprapa of the RTP’s Disciplinary Division told the Gazette that the investigation committee called on Col Pornprasert several times for questioning, but was unable to contact him. His current whereabouts remain unknown.

Col Pornprasert changed his first name to “Paramate”, it was reported a year ago.

Col Chaiyaporn declined to give specific details about the investigation panel’s findings, except to say that Col Pornprasert was deemed guilty of a serious disciplinary breach because he was unable to account for funds under his control and responsibility.

Col Chaiyaporn declined to elaborate on how much money had gone missing, how many people had been questioned, or what efforts had been made to track down Col Pornprasert, who was Deputy Commander of the Royal Thai Police Foreign Affairs Division during his work at the TTVI.

As punishment, Col Pornprasert will be dismissed from the force and be stripped of his rank, he said.

The loss of one’s police rank is considered very serious in the Royal Thai Police; even former prime Thaksin Shinawatra still formally maintains his rank as a police lieutenant colonel, despite having been convicted in absentia of abuse of power while in office.

Other punitive measures against Col Pornprasert, and the decision on whether to charge him with criminal offenses, rest with the RTP board. The committee is expected to make a decision within two or three months, Col Chaiyaporn said.