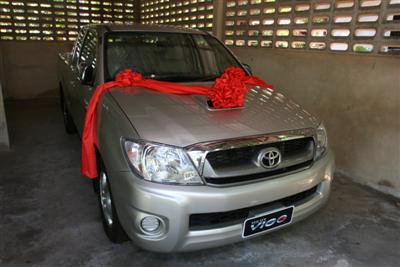 PHUKET CITY: For those who bought raffle tickets at the 2009 Phuket Red Cross Fair, it might be worth taking another look at the number – you may have won a Toyota Vigo.

The 650,000-baht vehicle was the top prize in the annual raffle at the fair, but it remains unclaimed seven weeks after the January 9 draw.

The deadline for claiming the prize is midnight tomorrow.

If nobody contacts the Phuket Red Cross Society with the winning ticket before the deadline, the Vigo will be auctioned off.

The Phuket Red Cross Society, who bought the vehicle from Toyota, will use the money for its own activities should nobody come forward to claim the prize.

A spokesman said the number was displayed on the Phuket Red Cross Society website as well as on notice boards at government offices across the island.

There would be little point in drawing another number because the draw was so long ago that most people would have thrown their tickets away, the spokesman said.