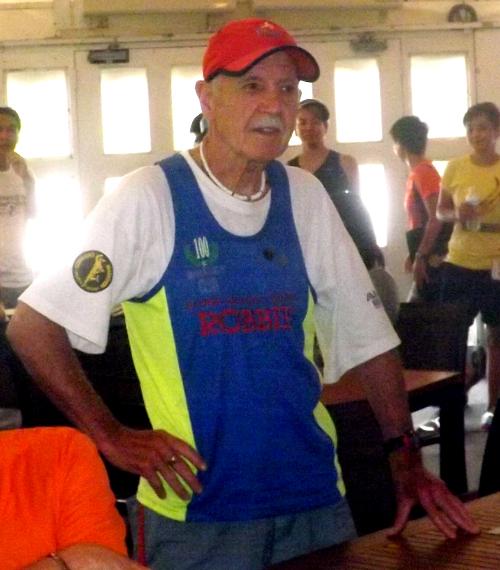 PHUKET: A total of 4,100 runners – aged 13 to 80 years old and representing 45 countries – have registered to compete in the five races of the 8th Laguna Phuket International Marathon (LPIM), with runners set to take their marks as early as 4am tomorrow.

The full marathon (42km) will be contested by a total of 700 runners; while 900, including the Gazette‘s own Isaac Stone Simonelli, will attempt the 21km half-marathon. The 10.5km race proved to be the most popular, with 1,200 set to compete. Another 800 will take it easy in the 5k 91.5FM Community Walk, and about 500 ‘good sports’ should breeze through the 2km kids’ race.

Following the pre-event press conference, held this afternoon near the starting line at the Laguna Complex in Cherng Talay, the Gazette spoke to a few interesting LPIM 2013 participants.

Mrs Sirporn Van Paassen, or as as she is commonly known by her Phuket Hash House Harriers’ name, “Minnie Mouse”, is excited ahead of her first-ever attempt at the full marathon.

Minnie Mouse, who has competed in and completed the half-marathon race in previous LPIM events, says she is now ready for the next step.

“As former head of the Phuket HHH, I’ve enjoyed running for some 25 years,” she said.

Asked about her training preparations, Minnie Mouse said she has done a few 30km runs, but admits that even this is ‘small fries’ when compared to the full 42km feat.

Australian ‘Couple on the Run’ Andrew and Sue O’Brien are also excited to take on the LPIM.

Having already completed some 200 marathons around the world, conquering an estimated 80,000 kilometers – all together – Sue told the Gazette that the most common question their fans and followers ask them is if the couple always finishes together.

“The answer is yes, of course! No matter what happens, if there’s something wrong with one of us, we always make sure to cross the finish line together – holding hands,” Andrew added.

Laguna Assistant Vice President Debbie Dionysisus, who has opted to run the 10.5km race this year, clarified the LPIM’s “Run Paradise” theme: “The LPIM is a fun event for the young, old, colleagues, friends and families – and everyone else – to come out and enjoy our beautiful home that is Phuket.

“There is no reward money, and we’re not necessarily targeting professional athletes… this is a fun event for everyone to enjoy in the perfect setting.”