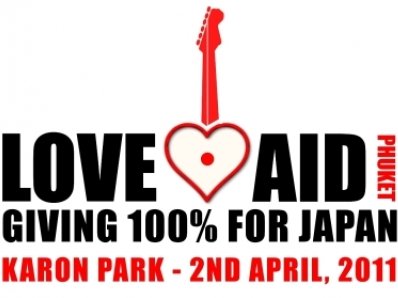 PHUKET: A benefit concert entitled “LOVE AID – To Japan From Phuket With Love” has been scheduled for April 2 on Karon Beach, with 100 per cent of proceeds going to help victims of the Japan earthquake, tsunami and subsequent explosions at a nuclear power plant.

The event was originally scheduled for next Thursday, but has been changed to Saturday, April 2, to attract more people, organizers said.

For many watching the terrible images on television of the triple tragedy, there is a feeling of helplessness. For those in Phuket who were affected by the 2004 tsunami, there is a sense of re-awakening to the nightmarish visions of destruction and desolation.

He realized that something needed to be done locally to help the victims – something big.

Mr Tanael spoke to his employers, who were quick to say they would back him 100 per cent. After a flurry of phone calls to other hotels and the local municipality he knew that there were others willing to give their support as well.

A relatively recent arrival to Phuket, he called on local media and friends to attend a meeting on March 16, where it was decided to hold the huge benefit concert on Karon Beach.

“The idea is to have our very own ‘Live Aid’ style concert where people can enjoy the music, food and drink knowing that every baht will go toward helping Japan.

“I have worked in Japan and know the people are very kind. They were among the first to help Phuket when the tsunami struck here and now it is our turn to help,” Mr Tanael said.

To keep the event accessible to everyone, the entrance fee will be only 100 baht. Food and drink coupons will be sold for 100 baht each.

“100 baht = 100 per cent donation and 100 per cent makes the difference. We are doing this to make as much money as we can for these people, so we keep it simple this way. They need this money now, so we must move quickly.” he added.

It was less than a month ago that the Japanese Rotarians donated 400 bicycles to students in Phuket.

Many hotels and restaurants will donate food and drink and sponsor booths. Other businesses are expected to donate auction items.

Entertainment director of the event, Ricky Zen, has helped organize similar events in the past. He is confident that some of the island’s top musicians will be playing on the day.

“So far the response has been overwhelming, and although it is too early to confirm all the acts as yet, I can say that it will be a quality event. Everyone wants to help,” Mr Zen said.

A website for the event is currently under construction.

Anyone wishing to donate or help can contact Edgardo at 080-9515056 or ktbfbms@katagroup.com.

Auditions and rehearsals for artists will be held at Rick ‘n’ Roll Music Cafe in Kata.

For a report on how the tragedy is affecting Phuket’s Japanese residents, pick up a copy of the latest Phuket Gazette, available at newsstands this afternoon.