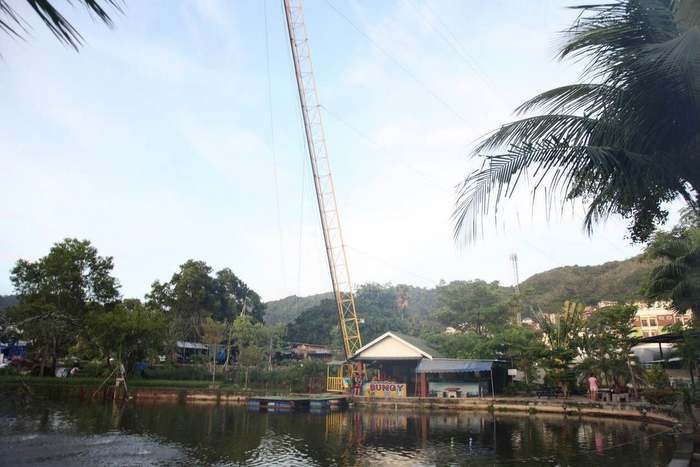 PHUKET: Police are investigating the death of a Kuwaiti tourist who was fatally injured in a bungy-jumping incident last night in Phuket.

Abdullah Adel Kadhmbadman, 25, was rushed to Patong Hospital by a World Bungy Jump Patong employee. He was pronounced dead shortly after he arrived at the hospital.

“The man who brought Mr Kadhmnbadman to the hospital first told emergency room staff that the tourist had chest pain, and then fell unconscious,” Maj Teerasak Boonsang of the Patong Police told the Phuket Gazette.

“Then, after the emergency room staff asked more questions, he said that the tourist had fallen to the ground during a bungy jump.”

X-rays of Mr Kadhmbadman revealed that he had a broken neck and several broken ribs.

“After questioning hospital staff and investigating the scene of the accident, we believe that the wire securing Mr Kadhmbadman’s feet during the jump broke,” said Maj Teerasak.

“However, we will continue our investigation and question the owner and employees of World Bungy Jump Patong.”

Police have yet to determine whether or not the death was an accident or if it was a result of reckless endangerment on the part of the bungy-jump owner, confirmed Maj Teerasak.

World Bungy Jump Patong declined to comment to the Phuket Gazette regarding the fatal incident.

Last year, two men were killed in a bungy jumping accident in Chalong. The facility had yet to open to the public, and was awaiting government confirmation of its safety (story here).

Pebbles at Phuket skate park cause a stir