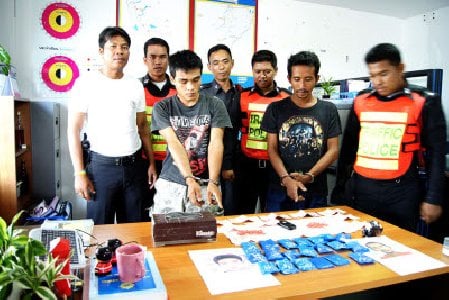 “The smell of ya bah was all over the truck,” said Tah Chat Chai Police Superintendent Sakchai Limcharoen.

Police found the tablets hidden inside a tissue box in the truck, he said.

Mr Sayan, a palm oil farmer in Krabi, confessed that he was a ya bah addict, police said, and he had agreed to transport the drugs from Trang to Phuket in exchange for 6,000 baht and 30 ya bah pills.

He told police that he was to deliver the drugs to someone waiting at Phuket International Airport and that Mr Thirapong had been asked to accompany him for the trip.

The pair have been charged with drug possession.

Pol Col Sakchai said that since the beginning of August, Tah Chat Chai police have confiscated 27,481 ya bah pills with an estimated street value of over 8.2 million baht.