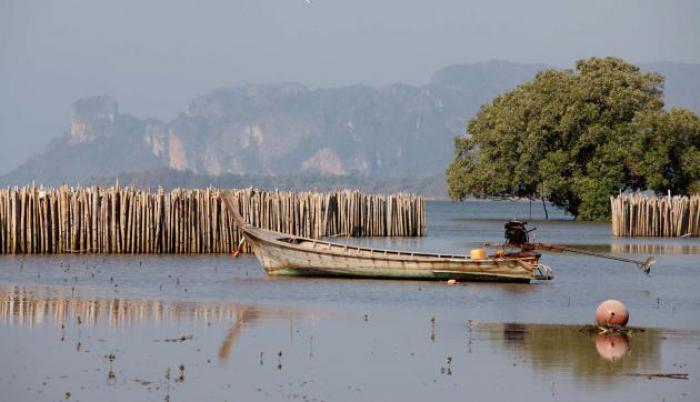 PHUKET: After enduring huge waves and strong winds for several years, residents of a seaside village in the province of Krabi have adapted to the effects of climate change by using bamboo to build temporary barriers to prevent coastal erosion.

The barriers were built along a 500-meter stretch of coastal area in the fishing community in Klong Prasong, Muang district, to reduce the impact of waves that erode the seashore and destroy residential areas, especially in monsoon season from June to November every year.

Sea waves have eroded more than one kilometer of coastline, said local fisherman Sanit Rotkerd, 40. He and other villagers have been forced to relocate to higher land.

“In my lifetime I have had to move twice because of [coastal erosion] caused by strong waves,” he said.

Previously, the village was surrounded by a beautiful sandy beach and mangrove forests, which protected residential areas from erosion. But since the sea waves have become stronger and more destructive, Mr Sanit’s land, about a kilometer from his current home, has been slightly eroded and submerged under seawater.

Another fisherman, Suradej Ornboot, 50, recounted a similar experience. He said the fierce winds and furious waves destroyed the mangrove forest where local villagers once obtained fish, seaweed and other food sources.

“Since the mangrove forest was destroyed by the strong waves, it is really difficult to find food, not only for eating but also for making money,” he said.

Mr Suradej’s house is near a coastal area, and this land has been eroded by the sea waves in the past several years. Sometimes, he goes all night without sleeping as the waves flood his wooden cottage.

“I will have to stay here for the rest of my life, as I have no place else to go,” he said.

After learning that the winds and waves were a threat to local villagers, the local administration organization built a concrete wall along the coastal area to prevent erosion. While the wall can protect residential areas from erosion, it cannot help the damaged mangrove forest recover or replace the soil in the coastal zone.

Supported by the Rak Thai Foundation, villagers starting discussing ways to protect their village, coming up with the idea of using bamboo to build temporary barriers to protect the land, an idea they borrowed from residents of Samut Sakhon province who were also affected by coastal erosion.

“After the establishment of the bamboo dams, we found that the mangrove soil returned and some species of mangrove tree, such as the Aegiceras corniculatum, have grown back,” said Vinai Yongkit, an Islamic-studies teacher who led villagers in building the barriers.

“We also can see the other mangrove trees, like Rhizophora apiculata bloom, which is a good sign that the mangrove forest is recovering. That means we would have a natural wall to protect us from the erosion caused by furious waves in the future,” he said.

Phuket Sport: To carb or not to carb