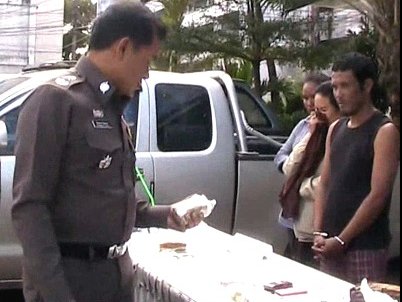 PHUKET: Police believe they have broken a major local drug network with the arrests of 13 suspects and the seizure of more than 6 million baht in drugs in Krabi province, across Phang Nga Bay from Phuket.

Among the weapons seized was an M16 assault rifle, he added.

However, after questioning Mr Nantapol, police were able to arrest 12 more people at several undisclosed locations throughout Khao Phanom District in Krabi Province.

Although Khao Phanom is not in the more popular coastal holiday resort areas on the Krabi coast, the area is well known to tourists for its Khao Phanom Bencha National Park and the protected forests surrounding Phanom Bencha mountain, which stands 1,397 meters above sea level.

“Wirachai alone was found in possession of more than 14,000 ya bah tablets,” said Gen Nantadech.

The weapons confiscated comprised two shotguns, a 9mm handgun and a .38 pistol as well as 100 rounds of ammunition, he added.

“All 10 suspects are local Krabi residents,” Gen Nantadech pointed out.

“Two other suspects arrested in the raids were Yottikrai ‘Moo’ Kitphadung, 41, from Nakhon Sri Thammarat, and Kanyawee ‘Hai’ Gumnerdsung, 40, from Chiang Rai,” he added.