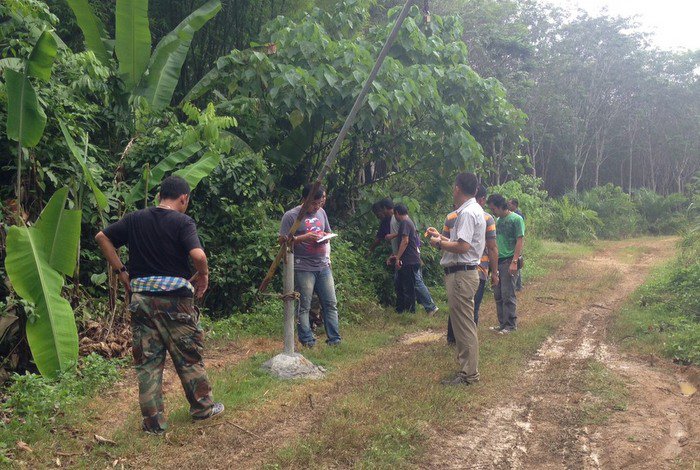 “There is no ownership document for the plantation in Khao Phanom. Hundreds of people are trying to takeover the 1,000-rai track of land because the previous owner died a few months ago,” Col Somdet said.

“We have been told that this land plot belongs to a company called Thai Pattana, which nobody is currently running. However, there is no title deed for most of the land.”

Mr Thammayut, who was shot while heading home on his motorcycle, was a relative of the Na Khao Subdistrict Headman, another leader of the group trying to secure ownership of the plantation, Col Somdet noted.

When police and concerned officials checked the murder site, they found a shotgun about five meters away from the spot where Mr Thammayut was gunned down.

Locals had heard the gunshots and rushed to the site. However, the shooter had already fled the scene, explained Col Somdet.

The conflicts over oil palm plantations in Krabi have dragged on for years. In April this year, three men were killed at a different palm oil plantation in Nuea Khlong District (story here).

In May of last year, Krabi squatters staged a second rally at Krabi City Hall to protest against the use of police force after a man was shot and 50 others wounded during their initial rally staged at the Southern Sea Board Road. The protest was in response to them being removed from a palm oil plantation they are squatting on (story here).

In July 2012, Paruhas Kongbannuek, the village headman of Baan Khlong Wai Lek, was killed and five other people were injured in an attack that police thought might have been connected to his involvement with a self-proclaimed ‘mob’ protest over land rights in the area, which is known for its vast palm oil plantations (story here).

For an in-depth report on the palm oil plantation controversies across the south, click here.