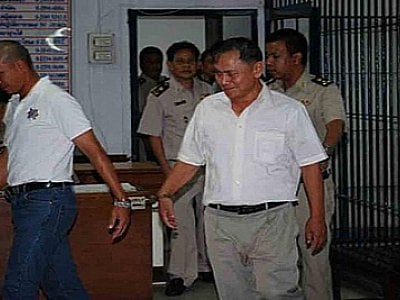 
Death terms for police guilty of murdering youth
Phuket Gazette / The Nation
PHUKET: The Criminal Court yesterday handed down a guilty verdict to five former Kalasin-based policemen for their involvement in the extrajudicial killing of a 17-year-old boy in 2004. Three of them were sentenced to death, another to life imprisonment, and the other to seven years in jail.

The death sentence was meted out against three police senior sergeant majors: Angkarn Kammoonna, Sudtinan Noanting and Pansin Uppana. They were 48, 43, and 42 years old, respectively. They were also found guilty of trying to cover up their crime.

Pol Lt Colonel Sumit Nansatit, who was serving as deputy superintendent of Muang Kalasin station at the time of the murder, was convicted of collaborating in it. He was sentenced to life imprisonment.

His supervisor, Pol Colonel Montri Sriboonleu, the former superintendent of Muang Kalasin Police, was found guilty of trying to help his subordinates escape the reach of the law. He was ordered to serve seven years in jail.

The court found that Angkarn, Sudtinan, Pansin, and Sumit strangled Kiatisak Titboonkrong, a 17-year-old suspect in a motorcycle theft case, in Kalasin on July 22, 2004. They and Montri then had Kiatisak’s body moved to Roi Et to make it appear like Kiatisak had hanged himself.

Kiatisak’s family suspected foul play in his death and lodged a complaint. From July 30, 2004 to April 27, 2005, Sumit and Montri had intimidated the family.

All of these police denied any wrongdoing. The court, however, found solid evidence against them and handed down the guilty verdicts.

The killing of Kiatisak took place at the time of the Thaksin Shinawatra government’s notorious “War on drugs”.

Last year, the Criminal Court handed down a suspended two year jail term to three police officers for opening fire on a drug suspect’s vehicle, which lead to the death of his two-year-old son in February 2003.

Pol Senior Sergeant Major Pipat Saenin, Sergeant Major Panumas Chanakham, and Sgt Major Anusorn Taensuwan were convicted of recklessness during the sting operation and attempt to arrest the drug suspect. They were also ordered to pay a fine of 10,000 baht each.

The fatal shooting also took place during the ‘War on drugs’ when there were said to have been more than 2,500 extra-jucidial killings.