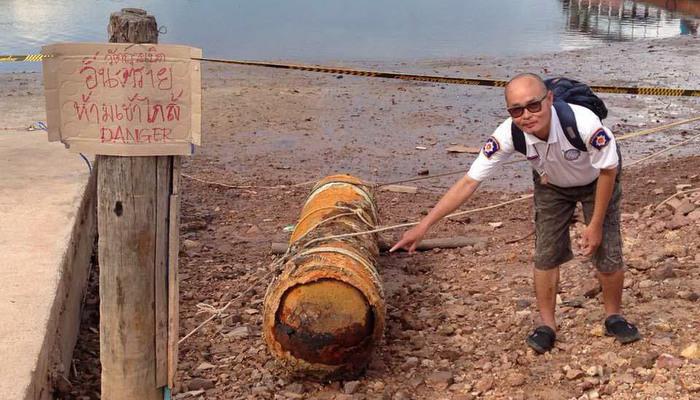 PHUKET: Krabi authorities are scrambling to have an explosive torpedo removed from the beach after they were notified by concerned villagers of the washed up wartime weapon on Tuesday.

“Koh Jum fisherman left on Tuesday to fish near Koh Sriboya. While they were fishing, they spotted a large metal item about four meters long and 50 centimeters wide floating in the water,” said Koh Sriboya Kamnan Samran Raden.

“They believed it was a torpedo, like they had seen in the movies, so they brought it ashore.”

Authorities have confirmed that the Japanese-made torpedo is extremely dangerous, said Sgt Maj Siwadol Yodmuen of the Khlong Khanan Police.

“Even though it is old and rusty, the torpedo can still detonate,” Sgt Maj Siwadol said.

Villagers have plead with authorities to remove the torpedo as soon as possible.

One of the concerned villagers told the Phuket Gazette that three villagers were killed by a similar weapon in the past.

“After we heard that authorities had confirmed that the metal object was a torpedo, and that it could still explode, we were terrified to have it near our homes,” said Singhanart Jeensrikong, 40.

“I heard that about 40 years ago, fishermen from Baan Koh Jum found a round item about 50 centimeters in diameter floating in the sea near the village. It exploded and killed three people in the process.”

So far, neither the Krabi Provincial Police Explosive Ordinance Disposal (EOD) unit nor the Third Naval Area Command in Phuket have been able to remove the weapon, as they do not have staff trained to safely handle explosives of this nature, confirmed officials.

“We first contacted the Krabi EOD to assess the weapon. They confirmed that it was a torpedo, but the staff were not qualified to remove it,” said Sgt Maj Siwadol.

“Authorities sealed off the area at Mutu Pier in Baan Kohjum where the torpedo is located.

“The Third Naval Area Command came to inspect the torpedo later that day. However, they were also unable to safely remove it.”

The Thai Navy Ordinance Department has been asked to send experts who can safely remove the torpedo, said Sgt Maj Siwadol. Meanwhile, a sign has been erected in the area to warn villagers against going near the weapon.

Earlier this year more than seven people were killed in Bangkok after scrap metal workers attempted to cut a WWII bomb open with a blow torch (story here).