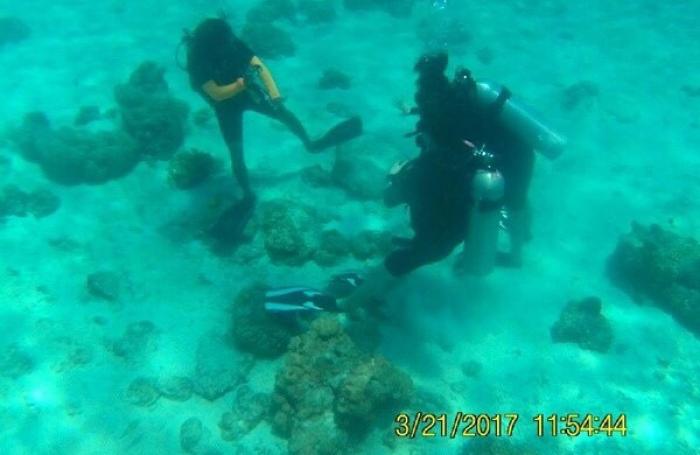 PHUKET: A concerned diver captured pictures of Korean tourists and their Thai dive instructor stepping on coral while diving at Koh Racha Yai yesterday. The diver then shared the snaps with other divers and officials in the hopes of bringing the offenders to justice.

A social media user who calls himself ‘Seaman Freeman’ shared the pictures of ‘Try Dive’ activities to a LINE group titled ‘Healthy Reefs’.

According to him, the incident occurred at about 11:55am when two women, along with their dive instructor, spent 15 minutes posing on the coral and taking photos of each other. The user’s pictures also showed the instructor holding a tourist’s hand to seemingly balance her on the coral while pictures were being taken.

Once the diver resurfaced, he saw the two tourists on the beach.

“I went to talk to them and learned that they are Korean and their instructor is Thai. However, they denied stepping on the coral,” he said on the LINE group.

The punishment for such behavior in Thailand is a maximum of one year in prison, or a 100,000 baht fine, or both. It could not be confirmed that, if found, the dive instructor would receive the same punishment as his foreign customers, as he was allowing them, indeed facilitating them, to step on and pose on the coral.

“The reason that I’m sharing this is that I want relevant officers to take action on this issue. Additionally, I want all diving operators and divers to come together and help prevent such activities. I don’t want to see our coral and marine life repeatedly damaged in this way,” the user wrote on LINE.

The photos were sent to Region 6 officers at the Department of Marine and Coastal Resources (DMCR).

“We really appreciate the photos. We are now checking to find out what happened and to see what we can do about this. We have learned their identities and are now hunting for them,” said Suchat Rattanaruengsri of the DMCR.

So far, the DMCR has been keeping a close eye on marine activities with signs and instructions to educate and warn both tourists and tour guides at Koh Racha Yai.

The latest case in Koh Racha involved a Russian tourist, who was jailed for two nights and forced to pay a 100,000 baht bail for feeding a fish. The incident made international headlines (story here). She was also required to stay in Thailand for a month until her case went to trial. Neither the tour guide nor the boat ‘captain’, both Thai, were punished.

“We will closely monitor all ‘Try Dive’ activities from now on. However, as we cannot keep observing tourists 24/7, we hope to educate dive instructors so they can inform tourists about responsible behavior,” said Mr Suchat.