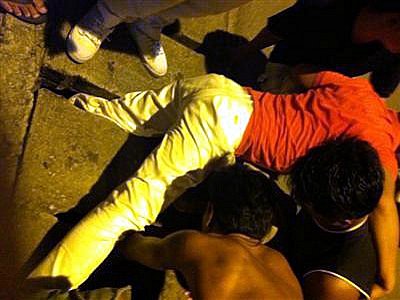 Phuket Kusoldham Foundation rescue workers were alerted to the man’s plight at about 8:30pm on Tuesday.

Racing to the scene, near the Bank of Ayudhya branch on Chao Fa East Road in Wichit, they found a middle-aged Korean man crying in pain with his left leg firmly stuck almost to the knee.

With the help of local residents, the Kusoldharm team took about half an hour to finally extricate the Korean’s limb, which suffered only minor injury.

The Korean, who declined to give his name, said he had just alighted from a passenger van in the area with the intention of walking home when his foot plunged through the crack and he was unable to remove it on his own.

US Embassy reaches out to Phuket