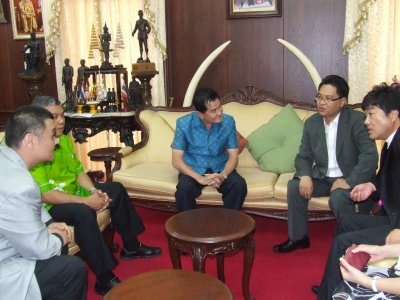 PHUKET: Representatives of a Korean firm are the latest potential East Asian investors to meet the Phuket Governor to discuss involvement in a Phuket transport mega-project, this time the proposed Patong Tunnel.

Accompanied by Phuket MP Raywat Areerob, a delegation from the AZ Worth Trust Company was received by Phuket Governor Wichai Phraisa-ngop at his office in Phuket Provincial Hall at 11am today.

CEO and chairman Kyung Keun Hong told Gov Wichai his firm was interested in taking on the project on a turnkey basis.

The firm is also interested in investing in the light rail project that would link Phuket International Airport with other parts of the island, he said.

Gov Wichai told the Koreans that two Chinese firms have expressed interest in the light rail project. All of the various proposals would be carefully considered, he said.

Gov Wichai said that since both projects would require Cabinet approval, the best he could do was receive their proposal and pass it on to the Ministry of Transport.

Developing the Patong Tunnel as a turnkey project avails the opportunity using the build-operate-transfer model, similar to the way some expressways in Thailand have been developed in the past.

Mr Kyung told the governor through a translator that he realized the need for the tunnel during his first visit to Phuket five years ago.

“It is very dangerous for people to go to Patong using the current route. We have seen the results of these dangers many times. We are interested in covering this project. We are ready to invest,” he said.

The company has reviewed several road tunnels in Korea comparable in scope and have come up with a rough estimate of three to four billion baht to complete the Patong Tunnel project.

A 40-million-baht feasibility study is now underway and a Bangkok-based consulting firm has recommended two 1.17-kilometer tunnels with elevated roads at both ends as the best possible option.

Initial estimates by the consultants put the cost at about 2.5 billion baht.

There seems to be a growing consensus that a tunnel is needed. In a 2001 Phuket Readers’ Poll, 71% of readers thought the money needed for the construction would be better invested in other areas, such as health care, education or environmental protection.

In a more recent poll, conducted in October last year, over 55% of those taking part were in favor of building the tunnel.

In Patong, opinion appears to be split. The business community, especially those with land and real estate developments along the road over the hill, are mostly in favor.

However, most of the residents of Ban Mon, where the flyover would be located, oppose the project.

A small number of people oppose the project of spiritual grounds, saying it could harm Phuket’s feng shui.