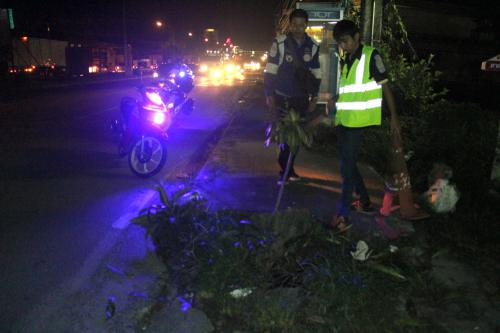 PHUKET: A local resident rescued a 4-year-old Korean boy who plunged into a drain two-meters deep along the bypass road yesterday evening.

“The cover for the drain was broken, and grass was obscuring the hole. It was hard to see because there was no light,” said a Kusoldharm rescue worker at the scene.

Boonkua Saelim, 42, rushed to help the boy after watching him disappear.

“I was standing at a tour counter when the boy and his father walked by on the footpath,” Mr Boonkua said. “It took us about three minutes to bring the boy to the surface after he fell into the drain.”

The boy, suffering only minor injuries, was taken to Phuket International Hospital by his father.

“The cover has been broken for a long time, but officials haven’t taken any action – maybe they are waiting for someone to fall and die before they fix it,” Mr Boonkua said.

Rescue workers at the scene set a tree in the hole as a stop-gap measure.