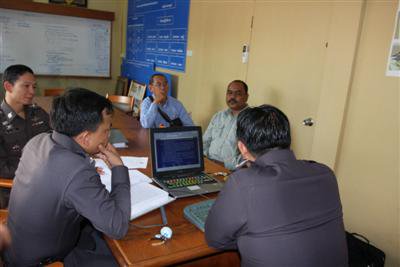 PHUKET CITY: The second of five suspects wanted for conspiracy to commit murder in the high-profile contract killing of Jintana Plaza heiress Komkai Kositkoon turned himself in to police on Thursday afternoon.

A warrant for his arrest was issued in December 2008 after police arrested gunman Arun Chanma, who confessed to carrying out the assassination along with two other men – both of whom remain at large.

The hit was allegedly arranged by a group of five men from Phattalung. The first suspect, Wiroj “Plop” Issara, turned himself in to police on February 17.

The 47-year-old headman of Phattalung’s Koh Maak district denied any involvement and was subsequently released on bail granted by the Phuket Provincial Court.

He is now on remand at Phuket Provincial Prison.

Maj Gen Apirak said police were making good progress in the investigation, which he described as “complex”.

He mentioned a business dispute as the probable motive for the killing. Police are also investigating the suspects’ possible roles in a series of suspected arson attacks at Jintana Plaza, located along the beach road in Patong, he said.