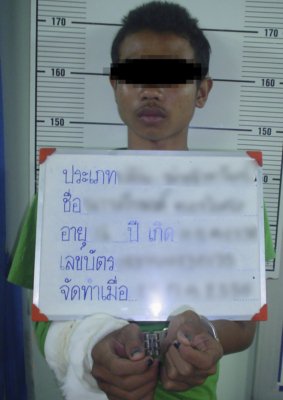 CHALONG: Two teenagers arrested by police have reportedly confessed to the stabbing murder of 53-year-old Norwegian Simen Sparre Knudsen on September 23, along with several other armed robberies of foreign tourists driving motorbikes alone late at night.

A source from Chalong Police, who requested that his name not be printed, identified the two suspects as 18-year-old Narongsak “Sak” Tongviset and his half-brother Pong, 16, whose full name cannot be printed because he is a minor.

Both youths are registered as residents of Surat Thani’s Phunphin District, but live in Kathu, where their common father is a taxi driver.

A third suspect, 18-year-old Theerapat Saivaree, remains at large. Police said he is originally from Satun Province, but has lived in Phuket for many years. Police believe he is hiding somewhere on the island.

After their arrests, the brothers admitted to using the same approach in this robbery that they had in previous attacks: arriving on two motorbikes, parking on a dark section of road late at night, and yelling abuse at their target – always a foreign tourist alone on a motorbike.

If the tourist slowed down or stopped, they would force him or her from the motorcycle, then beat the victim into submission using Thai boxing skills that all three had acquired from a local Muay Thai camp. They would then rob the tourist of all valuables, steal the motorbike and ride off on it, they said.

The main break in the case followed from sharp police work, coupled with some luck and stupidity on the part of the suspects.

At about 11:30 pm on September 27, just days after the murder of Knudsen, the three youths held up a Swiss tourist riding a rented red-and-black Honda Click motorbike on the dark stretch of road from Patong to Karon, near the entrance to Le Meridien Phuket Beach Resort.

The stretch of road has been the site of numerous robbery reports over the years, in part because it is dark and hilly and must be passed by tourists returning to Karon after a night of reveling in Patong.

The section also lies just before the border with Kathu District and thus falls under the jurisdiction not of the nearby Kathu Police Station but of the Chalong Police, whose headquarters are some 15 kilometers away.

The motorcycle stolen from the Swiss man was rented to him by a policeman, Pol Sen Sgt Maj Boonler Samngamya, who heads a Chalong Traffic Police unit and operates a small motorcycle rental agency in Karon.

Although he was unaware that the bike he had rented to the Swiss tourist a few days earlier had been stolen, with the sharp eye of a traffic cop he recognized a passing Honda Click as his own as he stood on the side of Wichit Songkraam Rd in Kathu at about 7 pm on September 29.

Curious, he decided to trail the driver, Pong, and his companion Sak, riding pillion. He followed the pair as they turned south onto Chao Fa West Rd near Central Festival and continued to tail them all the way to the entrance of Soi Nai Trog in Chalong Village 5.

It was there that the out-of-uniform officer pulled alongside the pair and ordered them to stop. When they sped up Sgt Boonler gave chase, eventually pulling alongside them and kicking the bike to the ground.

He arrested Pong, who was found in possession of a replica pistol, but Sak managed to escape into a nearby rubber plantation and evade the five-hour police manhunt that followed.

Using a police sketch based on a description given by his half brother, Phuket City Police arrested Sak riding another motorbike around Borrae Village, Ao Makham, on September 30. He was found in possession of an unregistered pistol and a knife, which he later allegedly confessed to having used to stab Mr Knudsen.

A subsequent search of their home at 115/163 Village1 in Tambon Kathu ended in the seizure of several other motorcycles that had been stolen in similar fashion, the source said.

The two brothers and their accomplice had all previously served time in the Phuket Juvenile Observation and Protection Center. Pong had been released just a few months ago after a one-year theft conviction.

The source said that once in custody, the two brothers said that to rob Mr Knudsen they had to punch him repeatedly in the face, kick him hard in the groin and stab him twice. They said they left him in the middle of the road from the Kata Viewpoint to Rawai about 1 am on September 23. He was rushed to Phuket International Hospital, where he later died.

The killing of Mr Knudsen, a resident of Phuket for over 30 years, has been headline news in the Norwegian press.

Although the murder has been overlooked or ignored by the Bangkok-based English language media, safety issues regarding foreign tourists who visit Phuket and expats who have chosen to reside here have again been raised.