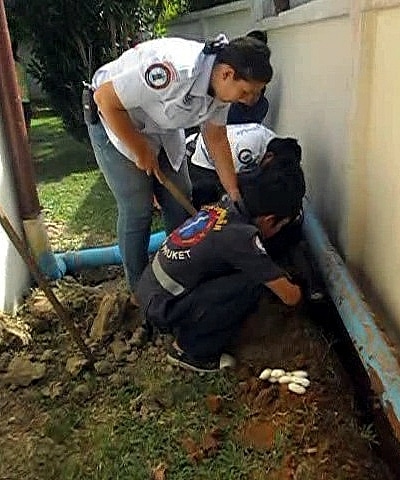 PHUKET: A man worried that a clutch of king cobra snake eggs beside his house were about to hatch today called in the egg-citing find to rescue workers to have them removed immediately.

Ruamjai Rescue Foundation workers received a call from the owner of the house, in Soi Ban Klang off Chao Fa West Road, at about 2pm.

Eleven eggs, oval in shape and about two inches long, were found under a pipe beside the house.

On hand to examine the eggs was foundation snake expert Sayan Thammapan.

The house owner told Mr Sayan that he saw a couple of king cobras behind his house many days earlier, but thought nothing of it.

Then he found the eggs today and called the foundation.

“King cobras are known to lay the eggs in areas that used to be fruit farms and near areas of abundant forest,” Mr Sayan explained

“People later came and settled in areas where many cobras and king cobras used to live,” he said.

The foundation often receives calls from people wanting snakes removed from their homes, he added.