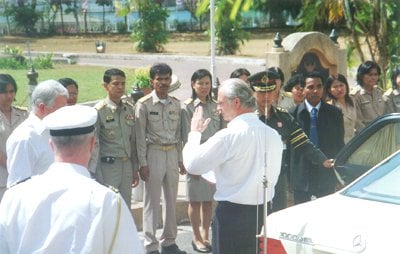 PHUKET CITY: Sweden’s  King Carl XVI Gustaf and Queen Silvia visited Phuket Provincial Hall this morning as part of a state visit to Thailand to thank the Thai people for their efforts in the aftermath of the December 26 tsunami.

The civil servants traded in their normal batik work outfits for more traditional khaki uniforms to show their respect to the Scandinavian monarch.

The King and Queen later paid a visit to Bangkok Phuket Hospital before flying off to inspect the devastated Ban Nam Khem area of Phang Nga. They were expected to return to Phuket this evening, to meet the Governors of Phuket, Krabi and Phang Nga at the Pearl Village Hotel in Nai Yang.

After a closed meeting with the Swedish royals, Gov Udomsak told the press that he had briefed them on local efforts immediately after the tsunami.

“His Majesty the King of Sweden praised the Royal Thai Navy, which searched for survivors, brought them to safety and provided them with prompt medical attention. They also thanked police officers, other military branches, and everyone else who worked so hard to help survivors,” he said.

“Sweden is interested in helping to restoring our natural resources [damaged by the tsunami], and intends to offer technical assistance in this effort,” he added.

About 230,000 Swedes visit Thailand annually. The latest figures show that 569 Swedes are still missing after the tidal wave, with 169 deaths confirmed.

The Governor said that he expects tourism arrivals from Sweden to return to normal soon, because Swedes like Thailand and the Thai people.