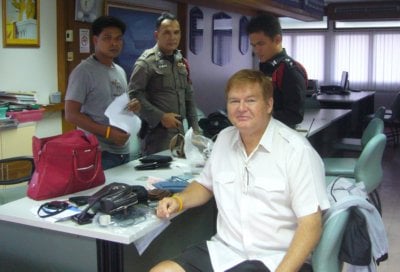 PATONG: Police early yesterday morning arrested a burglar minutes after computer guru and Gazette columnist Woody Leonhard had chased the robber out of his home with a butcher’s knife.

K. Woody told the Gazette, “The burglar first tried to come into my townhouse through the sliding glass door in the top floor bedroom. Apparently he saw my 82-year-old father sleeping, so he came down to the second floor.

“He ransacked all three floors of my unit, taking cameras, jewelry, watches, passports, an iPod, cash and more. He woke me up about 5:15 am when he opened a squeaky door to one of the guest rooms adjoining my bedroom on the bottom floor.

“I got up and saw clothes tossed randomly on the floor in the hallway. Suspecting the burglar was still in the guest room, I ran upstairs and grabbed a butcher’s knife. The thief heard me come out of my bedroom and hid in the ground-floor guest room, apparently looking for a way out the back. There is none.

“I used the intercom to call [my fiancee] K. Add and have her lock our bedroom door, then call the police. I waited at the top of the stairs, knife in hand.

“A few minutes later the thief tried to make a quiet escape up the stairs. I yelled at him and waved the knife. He beat a hasty retreat to the guest room, and tore the room apart looking for a back exit.

“Cornered, he ran out of the guest room and tried to break down the door to our bedroom. K. Add was terrified as he pounded at the door. The lock held.

“He walked up the stairs, signaling to me that he was going to go up one floor and leave. I waved the butcher knife and yelled, ‘I’ll kill you.’ He reached for his waist. I thought he was going for a knife or a gun. Then, very quickly, he slipped out the side of the stairs and scrambled up the stairwell. I ran after him.

“He beat me to the sliding glass door, ran out on the deck and leaped from our balcony to our neighbor’s. I threw the knife at him. No luck. In the blink of an eye, he broke into the house next door from the second-story balcony and escaped.

“Moments later the police arrived. K. Add and I ran out of the house and talked to them. They blocked the bottom of the Andaman Hills estate, and caught a man who was running down the small path that snakes through an adjoining guesthouse.

“The police did a great job. They responded to our call in four minutes, caught the burglar, retrieved all of the loot from our place, plus loot from one other victim whom he apparently burgled just before he hit us,” he said.

“The thief isn’t a drugged-out teenager or an indigent Burmese laborer. He’s a middle-aged, balding Thai man from Phang Nga.

“I think he’s an experienced burglar: he carried an official-looking but fake international police card that identified him as a member of the Swiss Police, based in Basel. He was also carrying his Thai ID card,” K. Woody added.

The man was identified as Bunrit Sae-Tiew. He was charged with breaking and entering, and theft. The Gazette was informed that he pleaded guilty to the charges in court today.

Reflecting on his reaction to catching the burglar in his home, K. Woody said, “People SHOULDN’T do what I did. If the burglar had pulled a knife or a gun, I would’ve dropped to the ground immediately.

“But with my fiancee on the ground floor, my Dad on the top floor, and me literally in the middle, threatening him with a big knife seemed like the right thing to do.”