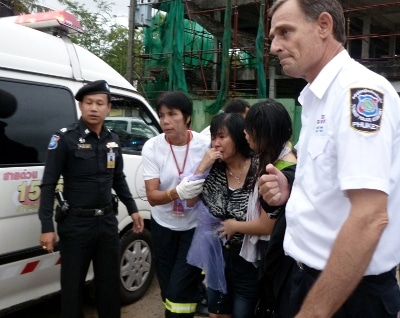 PHUKET: The Phuket-based company operating tours on board the speedboat that capsized off Phi Phi Island in rough seas yesterday has vowed to cover all medical expenses for those injured in the incident and to offer compensation for the emotional stress suffered.

Pongsak Pachantabut, the manager of Phuket New Generation Travel Company, today confirmed to the Phuket Gazette that there were 37 tourists of varying nationalities and four crew members on board the speedboat, the Luk Pradu 26, at the time of the incident, not 24 passengers as originally reported.

“Another speedboat was able to immediately rescue 13 tourists, including a child, and take them back to Koh Phi Phi,” Mr Pongsak said.

However, that left 24 tourists and the crew members bobbing in the rough sea for more than an hour, while the company scrambled to get another speedboat, Rak Talay, out to rescue them.

Mr Pongsak explained that his company had not been told to keep their boats in port due to the rough weather, and so had three speedboats running tours to Phi Phi Island yesterday.

“Because we knew that a storm was coming, we decided to cancel the snorkeling part of the trip around Koh Khai. After lunch, two of our boats departed Phi Phi for Phuket, while the other [Luk Pradu 26] was running a little late.

“The Luk Pradu 26 was hit by a strong gust of wind and a big wave, then capsized,” he said.

“Luckily, all the passengers on the boat, which wasn’t overloaded, were wearing life jackets when the boat rolled over,” he added.

At Chalong Pier seven tourists from China, England and Indonesia were transferred to ambulances and brought to Phuket International Hospital for treatment of a variety of minor injuries.

Seven other tourists on the boat have filed a report with the Phuket Tourist Police.

“I saw a big wave hit the speedboat hard, and I thought the boat must be damaged. Then I saw that the front part of the boat was broken… the speedboat capsized immediately,” said 22-year-old Samantha Chappell.

“We were floating in the water for more than an hour before another boat saved us. I was very scared at the time,” she added.

Ms Chappell said that she and her friends were still planning on spending a little more time in Phuket before heading to Bangkok. Originally, they were planning on taking a couple more trips out to some of the other islands surrounding Phuket.

However, one member of the group, Eimear Connaughton, 20, made it clear that getting on another boat was not something she was interested in.

“I will not go on a boat in the monsoon [weather] again,” she said.

Another member of the group, Robert Scott, also 20, confirmed that he was wiling to get on a boat again, but whether he did or not depended on the feelings of the others.