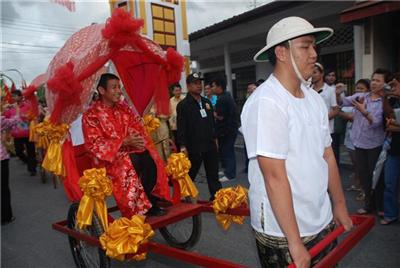 PHUKET: Kathu will host its second annual ‘Kathu Culture Road’ fair from June 25 to 27, the municipality has announced.

Kathu Mayor Chaianan Suthikul said they decided to host this year’s event in June as a way of attracting more tourists in the low season and to preserve Kathu’s unique culture.

With a total budget of about 1 million baht, festival activities will be held in front of Kathu Municipality and along the road to Wat Kathu. Kathu Soi 4 will be the site of exhibits in tin mining, ore trading and opium smoking, which was widespread during the tin-mining days.

Among the performances to be held on the main stage will be a historical reenactment of events leading to the Ang Yi tin miners’ rebellion of 1876, during the reign of King Rama V.

Another highlight will be a ‘living exhibition’ showing the way of life of Kathu people during the tin-mining era, Kathu Municipality Education Section Assistant Director Aphirat Sermchan told the Gazette.

Although the Phuket Vegetarian Festival is now largely centered around Chinese shrines in Phuket Town, the unique cultural event was born in Kathu.

Mainland Chinese are particularly interested in the unbroken cultural traditions of the ethnic Chinese community in Phuket, especially the Vegetarian Festival, because many of their own traditions were forced to end during the Cultural Revolution.