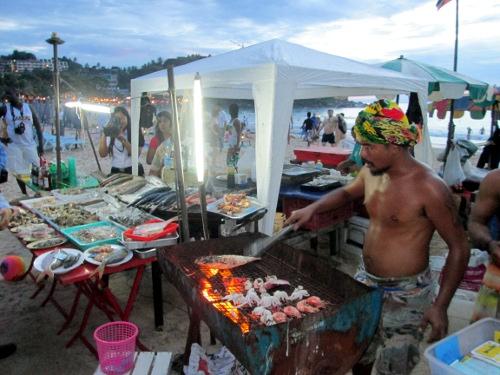 PHUKET: Karon Mayor Tawee Thongcham warned Phuket seafood vendors with stalls set up along Kata Beach that they will be charged with beach encroachment.

The raids, which included officers from the Muang District Office, Karon Municipality and local police, specifically targeted the area near the Kata Beach Resort and Spa.

“We have repeatedly warned them [beach food vendors] about setting up stalls and serving food along the beach. Each time we raid them, they packed up and leave – but they keep coming back,” Mayor Tawee explained.

“We needed the support of the provincial authorities to get them to stop, because we alone [Karon Municipality] do not have the authority to force them to move,” he added.

Prapan Kanprasang, chief of the Damrongtham Center (provincial ombudsman’s office) at Phuket Provincial Hall, confirmed that his office can do nothing to protect the beach vendors who are illegally setting up their stalls on public beachfront land.

“The raids on November 28 came after the Damrongtham Center received a complaint about the seafood beach vendors. The complaint claimed that hotel guests in the area were not only being adversely affected by seafood barbecues on the beach, but also by fireworks, fire lanterns and fire dance shows on the beach,” Mr Prapan said.

“On November 28, the operators were warned to immediately pull down their stalls and stop cooking seafood. We empowered Karon Municipality to remove the vendors. If the vendors persist, legal action will be taken against them,” he added.

The move to evict seafood vendors from Kata and Karon beaches comes in the wake of a “beach cleanup” campaign that began softly last month with the municipality issuing warning letters to beach vendors in the area, including those selling food at beachfront roadside stalls or from motorbikes with sidecars.

“After issuing warnings, we fined many vendors, with each one facing a fine of up to 2,000 baht,” Mayor Tawee said.

“However, some of them still came back to sell food on the beach. Three vendors in particular are always there. They refuse to move,” he added.

The disrespect for the law earned the food vendors a series of raids by municipal officers evicting them from their usual food stations on November 1.

Mayor Tawee explained that vendors may continue to sell fruit on the beach and massage operators remain unaffected.

However, all cooked food on beaches and hawkers of any other items must go.

“According to the Cleanliness and Tidiness of the Country Act 1992, beach vendors cannot sell food on the beach or on in any public areas. Doing so is considered illegal, and this includes any motorbike food vendors who park and sell food on the road,” Mayor Tawee said.

“Sidecars and other motorists who park on the road to sell food are also illegal under traffic regulations because they block traffic,” he concluded.

Wanchaloem Hemsalamad of Karon Municipality’s Public Health and Environment Office clarified that legally registered restaurants that have been inspected and approved by health officials and issued a license to prepare and sell food may do continue to do so.