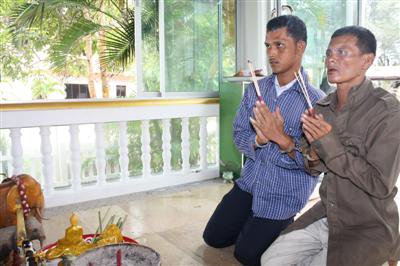 RAWAI, PHUKET: Karma has caught up with two thieves who yesterday confessed to committing a string of temple donation box robberies in Phuket.

Monks at Nai Harn Temple called Phuket police yesterday after detaining a man they caught trying to steal money from a donation box on the temple grounds.

The gaunt Mr Komon, who appeared to be under the influence of alcohol or drugs at the time of arrest, was no match for the strong and sober young monks that captured him, the monks said.

His alleged accomplice, 26-year-old Pongpiphat Phinyoying, was arrested later the same day while he was working at the Government Savings Bank office in Phuket Town.

The duo’s modus operandi was to case temples during the day, then sneak back inside after midnight and make off with their ill-gotten gains.

They used the money to fund drinking and karaoke singing sessions, they confessed.

“Most of the time they got away with about 3,000 to 4,000 baht in donated money. They don’t strike until the amount collected reaches that amount,” Maj Jarun said.

“They work as a team, one watching the entrance and serving as guard while the other makes the heist. They confessed to successfully robbing eight temples in this way,” he said.

Some of the most prominent temples on the island were targeted, including Wat Luang Pu Supha and Wat Chalong.

“They pick the large, well-known temples because they get the most donation money,” he added.

One of the monks involved in the arrest was in disbelief at the thieves’ lack of ethics.

“I can’t believe this guy tried to steal money from the temple, especially money made through the hard work of people who wanted to make merit,” he said.

“How could they do that, especially as we are all Buddhists?” he asked.

The men will have to deal with the effects the crimes will have on their karma, he added.

In Thailand temples are seldom targeted by thieves – and not only for ethical reasons.

Most Thai temples are home to large packs of stray dogs, many dumped there by their former owners.

The dogs also serve as a potent security force for their Buddhist benefactors.

“We saw this guy before, but we weren’t sure if he was the thief or not. But on the night of the arrest we heard a lot of barking, so we came out to check the cause,” the monk said.

Both suspects have been charged with theft by day, which carriers a stiffer penalty than night time thievery.

Because they chose a place of worship, they could end up spending five to ten years behind bars, police said.