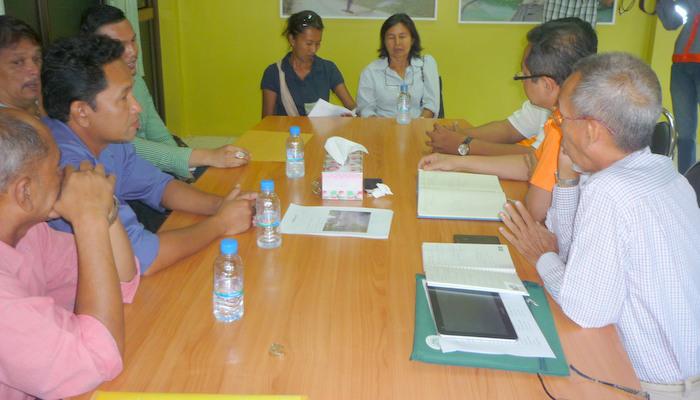 Officials and residents chalked the rancid water up to laundries and residents washing clothes and releasing the untreated wastewater into a canal that connects to the sea, said Krit Sariya, chief of the Kamala branch of the Community Organizations Development Institute.

“We want the Kamala Tambon Administration Organization (OrBorTor) to find a solution to the wastewater problem as soon as possible,” Mr Krit said.

“If we do nothing, we will end up with a major black water problem like Karon [story here] and Bang Tao [story here]. We want solutions, so this does not affect our environmental image or tourism.”

Phuket officials met at the Kamala OrBorTor office to discuss both long-term and short-term solutions to the problem in an effort to prevent an overflow of wastewater into the sea.

“For the long-term, I think a water treatment plant is important. We have already applied for 300mn baht from the 2015 fiscal year budget to build it,” said Kamala Mayor Karun Sriden.

“In the meantime, we will dredge the canal to remove the smelly mud and install a net at the mouth of the canal to catch any garbage. The dredging should be completed in three months.

“Officers will be randomly inspecting houses and laundries, including washing machine services, to make sure they are not dumping untreated water into the canal.”

Mayor Karun also announced that weekly meetings will be held at the Kamala OrBorTor office to follow up on the wastewater and garbage problem in the area.