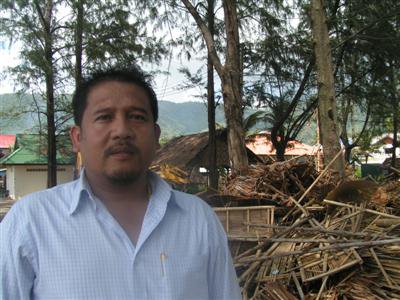 KAMALA: In an effort to beautify the beach front at Kamala, nearly 50 illegally-built businesses were bulldozed away on October 7 creating more walking space for tourists.

Santi Atthasap, Vice President of the Kamala Tambon Administration Organization (OrBorTor), told the Gazette that the move was in line with a provincial policy to keep beaches tidy and attractive.

The temporary structures, many of them constructed of bamboo, encroached on pubic land and created an eyesore, he said.

“We are in favor of entrepreneurs, but they need to follow OrBorTor regulations, otherwise the result is no different from a slum. We want to see Kamala’s beautiful beach back in its natural state,” he said.

“These people were notified of the destruction one month ago, according to the law. They had time to remove their belongings,” he added.

“Most of the shops were tour shops, restaurants and bars. The people who ran them knew they were on public property, but insisted on squatting. They took the opportunity to encroach on public land during the gap between election periods,” said Mr Santi.

“This beach is public property and belongs to everybody. Some 50 entrepreneurs have no more right to use it than anyone else in the district – including tourists. Besides, no permission to operate there was ever granted by the OrBorTor. We have to remove these structures before the situation gets even worse,” he said.

The encroachers had built nearly 100 structures along a stretch of beach about 4 kilometers long, he said.

“Now there is space to walk to the beach without having to pass dining tables,” he said.

The newly-cleared area will now be used as a public recreational area for tourists, with a small number of legally-registered souvenir shops allowed to operate there, he said.