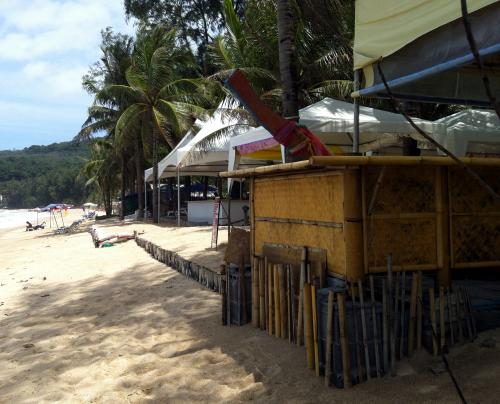 PHUKET: Bar and restaurant owners whose establishments encroach on Kamala Beach have been given more time to remove their illegal structures.

The original deadline, set after an inspection by local authorities in early September, was yesterday (story here).

“We will inspect the beach on October 8 and make a list of any establishments that have not removed their encroaching structures,” Mr Prasert Poksakul, an official with the Kamala Tambon Administrative Organization (OrBorTor), told the Phuket Gazette yesterday.

“Then we will send that list to Vice Governor Chamroen Tipayapongtada, along with a letter that states that if the owners don’t remove the structures themselves, we will demolish them,” he said.

The new deadline for demolition will be set by Vice Governor Chamroen, said Mr Prasert.

“Once the Vice Governor approves the demolition letter and sets a date to take action, we will call all the bar and restaurant owners in to sign the letter,” he said.

“We would like to warn the bar and restaurant owners to follow our rules and remove their structures before the Provincial officers come in and do it for them,” he said.