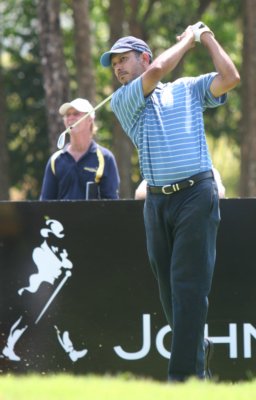 PHUKET: The second day of the Johnnie Walker Classic saw a reversal of fortunes for the top players as Englishman Oliver Wilson took the lead at -10, while South African Anton Haig equaled Greg Norman’s course record with a 8-under round of 64, leaving him in second place going into the playoffs.

Today’s play saw some wild shots and high scores. The cut line to continue into the playoffs landed at an even par, and notable players that failed to qualify included Paul Casey, Ian Woosnam, Prayad Marsaeng, Nick Dougherty and Prom Meesawat.

Early starter Jeev Milkha Singh had a inconsistent round. Starting on the 10th, tee he birdied the 440-yard 12th to move six under, then finished the nine with a double bogey on the difficult 17th.

Singh followed that with a treble bogey on the 18th and finished his front nine in 40 shots to fall back to -1. He then regained composure and rolled in four birdies on his back nine to return to -5.

The round of the day belonged to 20-year-old Haig. He rattled in an eagle and seven birdies to lie at -9 for the tournament, but the highlight of his round was a drive on the par-4 13th, which he followed by sinking the putt for a great eagle.

Canadian Mike Weir found problems on the front nine, and only a spectacular eagle on the 9th spared him, leaving him at a four-over 40, back to -2 overall.

Local Thai favorite Thongchai Jaidee also eagled the 9th and added 4 birdies to card, leaving him with 68 on the day and an overall -5 for the tournament. It’s been great to see the Thai players this week, some very impressive swings with great short games.

The future looks bright for Thai golf, as Phuket-born Sati Hongyok showed his potential. At 22, he will benefit from the experience and sure to be a name to watch in the future.

The late starters also began to make a move as Englishman Oliver Wilson mounted a charge on the back nine. His eagled both the par fives and fired an impressive birdie at the tough 14th.

His only dropped shot was on the 18th, where he holed a brave putt for bogey after playing his second shot out of the water hazard. His round total of 66 leaves him at -10, sitting one shot clear at the top of the leaderboard.

Oliver said that he, like most players, was finding the course and the weather a very good test. He explained his hard work on the mental side of the game was paying off, an area most golfers could improve on. Fitness could also play a key role over the weekend with high temperatures predicted to continue.

The leaderboard is a healthy mix of all players. We have some experienced players such as Retief Goosen (-8), Lian-Wei Zhang (-6), Colin Montgomerie (-5) chasing the young leaders of Wilson (-10) and Haig (-9), which should make for an exciting weekend of play.

World number 2 Adam Scott, from Australia, returned a 69 to finish at -1 for the tournament, while crowd favorite South African Ernie Els recovered with a solid 70 to finish at -1.