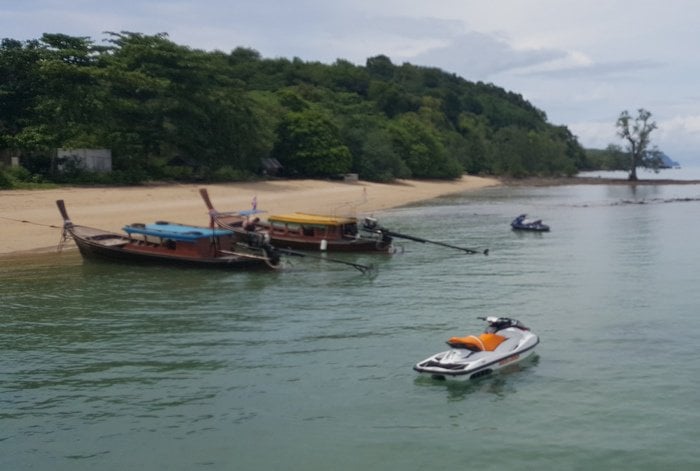 PHUKET: The Naka Island, A Luxury Collection Resort and Spa, based on the small island off the east coast of Phuket, is battling against local jet-ski operators.

“The jet-skies are dangerous. They are always coming too close to customers swimming at the beach,” said The Naka Island representative Sureeporn Roongreung. “They have yet to hurt anyone swimming or diving, and we want to make sure safety precautions are taken so it never happens.”

Mrs Sureeporn also alleged that the jet-ski operators wandered into the resort to look for customers.

“They annoy our customers and try to persuade them to ride a jet-ski.”

After The Naka Island staff failed to negotiate with the operators, a compliant was filed to the Damrongtham Center (ombudsman’s office) at Phuket Provincial Hall.

Vice Governor Somkiet Sangkaosuttirak; Bophit Chomchoei, registrar for the Phuket Marine Department; and other government officials followed up on the complaint yesterday.

“I have never walked into the resort. I’m only looking for customers on the beach, because I know it is a resort area,” Praphan Waharak, a representative of the jet-ski operators, told the investigative team.

Vice Governor Somkiet stepped in to point out that as long as the jet-ski operators were not entering the resort, they were free to use the public beach to source clients.

“We would like everyone to calm down and think about how we can work together and conduct business without interfering with others,” V/Gov Somkiet said.

Mr Bophit promised the resort that the Marine Office would start working on a zoning plan for jet-skis and swimmers.

“There is no law preventing the jet-skis from going as fast as the rider wants. However, I am eager to see the zoning set in place soon in order to protect tourists.”

Phuket on alert for MERS virus