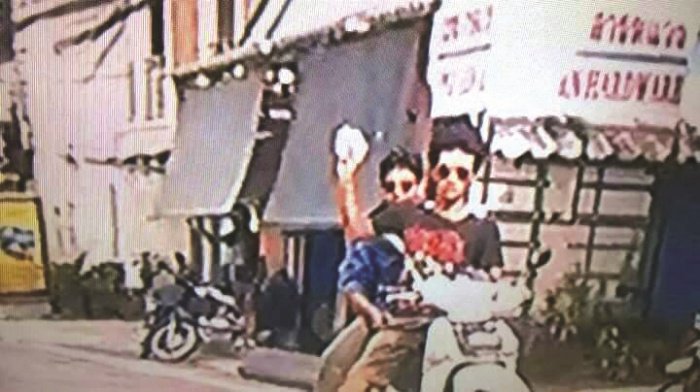 PHUKET: It is imperative that you have excellent defense driving skills in Phuket, especially if you are a daily commuter on some of the island’s busiest roads, such as Thepkrasattri. Drivers stop in front of you and park without warning, and people switch lanes without signaling and open car doors without looking. And, as I found out on my way to work on Monday, some have high-speed chases and throw rocks at buses.

I have no idea what caused this all-out battle. I only saw it as it sped past me… numerous times.

Two motorbikes being ridden by four young adults without helmets were throwing very big, heavy rocks at a bus right at the Koh Kaew border, heading toward the bypass road.

The motorbike drivers sped by me at least three different times, after they had stopped to replenish their arsenal. I tried to read their licence plate, but they conveniently tucked it under so it wasn’t visible.

At one point, a giant rock bounced off the bus and flew back toward me, causing me to swerve and almost hit the car next to me at full speed.

This went on all the way to the bypass road, where I finally lost track of them.

These people do not think.

Not only are these people risking their lives, but also the lives of the people on the bus and the people driving around them, and should something happen to someone, it affects the lives of family and friends of those people.

It makes me sad that people have become so narcissistic that they have no regard for anyone or anything else but their own self satisfaction.

It also scares me to no end that no matter how cautious a driver you are, or how considerate you are of those around you, all it takes is one very ignorant and uncontrollably selfish person to destroy someone’s life.

I just wanted to get to work, along with many others, and instead I was almost killed because someone, or in this case at least four someones, have anger-management issues and should be declared mentally unstable, and prohibited from operating any type of machinery.

Be careful out there, friends. Be calm. Be thoughtful. Be kind.

Opinion: Too good to be true