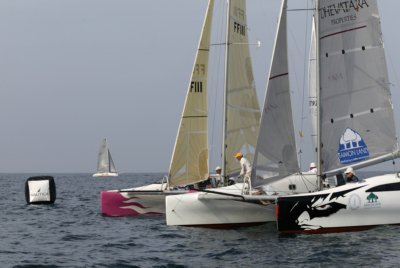 PHUKET: After the lay day yesterday to conduct minor repairs and regroup the troops, racing in the 21st King’s Cup Regatta resumed today. Crews may have appeared subdued in the light morning air, but underneath the determination to improve their standings over the last two days of racing was greater than ever.

The scoring team have worked tirelessly and assured everyone that the scoring system is up to date and that steps have been taken to solve the problems that have caused confusion over the past few days.

The day began with light winds that strengthened as the boats disappeared up the east coast before returning under spinnaker to the finish.

Tim Milner’s catamaran Seekronghuk was the biggest casualty of the day when the spinnaker sheet jammed just as a strong gust came through, causing the boat to capsize right at the finish line.

In the Racing class, the smaller boats exerted some pressure on the big guns in the penultimate race. Ray Roberts Quantum Racing and Stephen Reith’s Foxy Lady III have some work to do if they are to overtake Frank Pong’s Jelik in the overall points.

Quantum Racing nailed the start and rounded the windward mark in front of Jelik. The intention was clear and despite the bigger Jelik disappearing northbound over the horizon first, it was Quantum Racing that clawed back and came out on top in Race 6.

Foxy Lady III snuck into second place, relegating Jelik to third. Four wins in the earlier races has Jelik sitting pretty at the top of the table and will have to finish worse than third in the final race to lose their present lead.

Despite the faster boats establishing a huge lead during the Premier Cruising class race, at the end of the day David Ross’s Frangipani Girl won the handicap honors to lead the class.

Four second places in a row makes Geoff Hill’s Strewth the closest contender, but will have to put some distance between themselves to win the class.

Third place for Jon Wardill’s Australian Maid and fourth for Peter Cremers’ Shahtoosh has them waiting in the wings and ready to pounce if the leaders make any mistakes.

After a slow start to the regatta, Jeff Davidson’s Panic has dominated IRC 1, scoring four wins and a second place to take an insurmountable lead. Second place today for Tim Costello on Switchblade puts them second overall going into the final day.

In IRC 2, Peter Dyer’s Madame Butterfly continued to nail the start line and excel in light-to-moderate conditions. Although they have scored four wins and two second places to win the class with one day spare, the difference in times between podium places have been very close.

Niels Dgenkolf’s Phoenix came from behind to score third place today, but a little to late to make any impression on the overall leaders.

In the Firefly one-design class, four wins place Henry Kaye’s Mamba firmly at the top of the class. In spite of earlier problems, Roger Kingdon’s Moto Inzi is back on the pace and second place today gave them second overall.

Bill Phelps’ Twin Sharks was back on the water with a patched bow and finished in third in today’s race, but remains in seventh place overall.