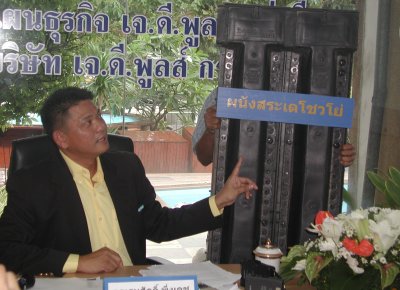 PHUKET: JD Pools today announced that it plans to sue both Desjoyaux Pools (Thailand) and the Department of Special Investigation (DSI) following the DSI raid of the JD Pools Phuket warehouse on August 18.

At a press conference this morning, Thanusak Phungdet, Managing Director of JD Pools Group, said that JD Pools will claim for damages arising from a distortion of the facts and defamation by a foreign company.

The joint-action for damages will ask for “approximately 100 million baht” in restitution.

The August 18 raid followed Desjoyaux’s filing of a complaint with the DSI, claiming that JD Pools were selling pool panel and filter products for which DesJoyaux have patent rights.

However, K. Thanusak today explained to the press that the panels produced were of a different design.

JD Pools were distributors for Desjoyaux pools in Thailand, but the two companies split in 2004.