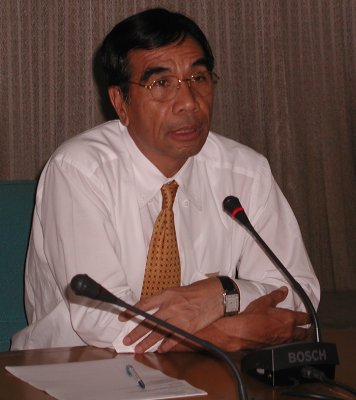 PHUKET CITY: At a meeting held at Phuket Provincial Hall at 2 pm today, Phuket Governor Udomsak Uswarangkura, along with other key island figures, reassured residents that life will carry on as normal following Tuesday night’s coup.

He said that Thai people already understood the national situation but that it could be misread by foreigners. He added that he had already explained to the British, Swedish and Norwegian consuls on the island that martial law “just means” empowering the military to give orders to civilian officials, and that it would not impact on people’s everyday lives.

Gov Udomsak said that, in Phuket, the police and navy are responsible for security. He added that troops from Krabi were posted at the airport as he thought the increased security measures and military presence would not deter tourists.

He also explained that his impending retirement, on October 1, and the annual redeployment of government officials on the same day would not be affected by the coup. “The changes in Bangkok will not interfere with the everyday running of the province, and I will carry on reporting to the Ministry of Interior,” he said.

Phuket Provincial Police Commander Pol Maj Gen Decha Budnampetch agreed, saying that the situation in Phuket remains normal and calm. He added however that he is concerned about the potential impact to tourism, especially in the coming high season.

“Phuket Provincial Police had already heightened security measures following the bombings in Haad Yai [on Saturday]. We are now prepared for any new security threats that might emerge, although nothing much has actually changed following the coup,” Gen Decha said.

He added, “In Singapore, they have had armed soldiers at the airport for years and that has never bothered people.”

Runjuan Tongrut, Assistant Director of Tourism Authority of Thailand (TAT) Southern Region 4 Office, said that tourism to Phuket should not suffer any real setbacks due to the political changes.

“The TAT agencies in 18 countries outside Thailand are helping their customers understand the situation here. They are also reporting the tourism situation in the markets they are responsible for to the central TAT office in Bangkok,” she said.

“We know that the Korean government is very concerned about this situation and we have had some cancellations from Korean tourists. The Japanese government has warned tourists of the situation but so far we still have no reports of canceled trips.

“The British Government have warned tourists to keep away from crowds but has not advised people not to come to Thailand. News about the situation has also been posted in the Scandinavian market but the big agencies are still confirming bookings for trips to Thailand.”

K. Runjuan added that all activities organized by TAT , such as the Thailand Travel Mart 2006 (TTM 2006) scheduled to be held in Bangkok on September 24 to 28 will go ahead as planned, as will the vegetarian festival in Phuket next month.

President of the Phuket Tourist Association, Maitree Narukatpichai also agreed that the tourism situation in Phuket will not be greatly affected by the situation and that, as long as there is no violence, will soon be back to normal.

Phuket Hotel Association President Sithi Tantawanich said that he has had no reports of any cancellations and that hotel managers in Phuket have explained to guests that they will not be effected by the coup.

Eam Thavornwongwongse, President of Phuket Chamber of Commerce, said that he had not heard of any hoarding of goods and that all businesses in Phuket are operating normally.

British Honorary Consul in Phuket, Alan Cooke, said, “In my experience, Thailand has developed a unique technique for dealing with coups; they are operated and managed extremely well and extremely successfully. I hope very sincerely that this occasion will be no different.”

Batten down the hatches