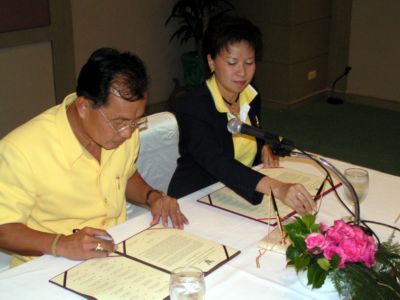 PHUKET: With the island’s only landfill perilously close to capacity and its sole incinerator incapable of burning even half the volume of trash sent to it every day, all of Phuket’s 18 local administrations on Wednesday signed a Memorandum of Understanding (MOU) pledging to tackle the mounting problem through trash separation and recycling.

The signing ceremony, at the Royal Phuket City Hotel, was presided over by representatives from two other signatory parties to the non-binding agreement: Phuket Vice-Governor Worapoj Ratthasima and Mingkwan Witchayarangsarit, Deputy Director of the Pollution Control Department (PCD).

The MOU, prepared by the PCD, contains three provisions.

The first stipulates that the PCD, working with local and regional offices of the National Resources and Environment Ministry, provide technical support to improve waste management practices.

The second calls for the Phuket Provincial Administration Organization (OrBorJor) and Phuket City Municipality to develop waste management practices aimed at reducing the amount of trash arriving at the incinerator daily. Methods include trash separation, removal of hazardous substances and recycling.

The new system will be implemented by Phuket’s 18 tambon administrations, which will be responsible for enacting local regulations, informing people in their jurisdictions about the new system and ensuring all members of local community take part in the project.

The third provision calls for all parties to the agreement to conduct follow-up assessments, identify problems and devise strategies to overcome any obstacles that stand in the way of developing an integrated sanitation and waste management system for the province.

There were 23 signatories to the MOU, the signing of which was witnessed by students from several schools administered by Phuket City Municipality.

ICEC location down to two sites