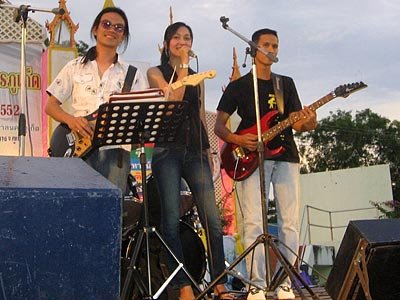 PHUKET CITY: Tonight is the last chance to attend the popular Isarn Colorful East One Tambon One Product (OTOP) Festival at Saphan Hin. Despite some unseasonably rainy weather, the fair has been a big hit with island residents for its nightly entertainment and wide variety of reasonably priced foods and drinks.

Among the most popular fare has been traditional Isarn dishes and seafood, including grilled fish and spicy horseshoe crab egg salad, served in the shell. The beer sponsor is Singha, with jugs of creamy draught beer available at 120 baht.

Outside the main fair grounds, near the Seashell Circle, products from 19 Northeastern and seven Eastern provinces are on sale, along with a wide variety of other mass produced items normally found at such events.

There are also a wide variety of rides for kids and games of chance.

Somsak Songnui of the Phuket Provincial Development Office said sales over the nine-day event should amount to around 13 million baht.