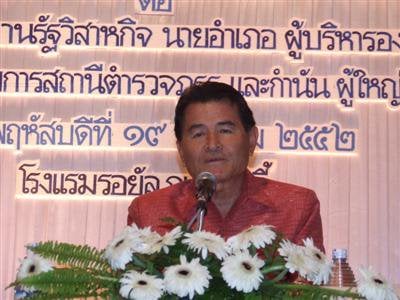 As Phuket is a tourist destination and a gateway to Thailand, Gov Wichai said he will focus on solving problems related to land, traffic, flooding, entertainment venues, business and drugs.

“Phuket’s environment needs to be improved, and we need to stop the destruction of natural resources by construction projects for resorts, hotels and industry. Also the problem of public land encroachment should be solved. I will talk with local leaders about the licensing of resort and hotel construction,” he said.

“Besides that, I plan to beautify the route from Phuket International Airport to Phuket City. We’ll clean it up and plant more trees, generating lots of benefits without great expenditure,” he added.

Gov Wichai also addressed the flooding of Thepkrasattri Road in front of the Boat Lagoon in Koh Kaew, saying he would speak to local leaders to try and find a solution to the chronic problem.

Fixing the lack of water in Kamala, Srisoonthorn and other drought-stricken areas is also on his agenda.

The problem of traffic congestion in Phuket should also be taken seriously, he said.

Gov Wichai singled out the route from Sarasin Bridge to the Tha Chat Chai checkpoint, as well as the Heroines Monument, Tesco-Lotus and Darasamuth School intersections as particularly problematic. One solution might be to ban trucks from certain areas during rush hour, he suggested.

Thick concrete barriers will be placed alongside some roads to prevent vehicles from hitting electricity poles, though he did not specify where or when this would happen.

Entertainment venues such as bars, pubs should follow regulations strictly, he said.

Identifying drugs as a major problem, he suggested introducing sniffer dogs at the Tah Chat Chai Checkpoint and other key locations in order to intercept narcotic shipments in transit.

Gov Wichai said he intends to talk to the relevant authorities about the longstanding issue of foreign tour companies that don’t employ Thai staff.

“Some tours bring their own guides and staff to the island while staying and traveling here. It means we lose benefits that should rightfully be ours,” he said.

Gov Wichai pledged to continue pursuing initiatives of former governor Preecha Ruangjan, including any projects under Royal Patronage and the decades-old dream of building an international conference somewhere on the island.

The speech closed with a promise to personally visit every government department in the province to meet staff and learn about the issues facing the province.