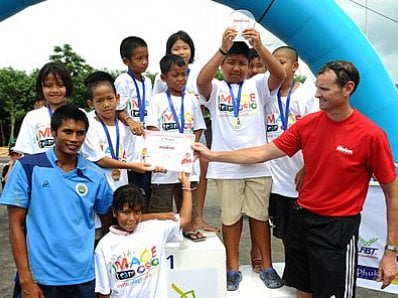 PHUKET: Triathlon events on Phuket are growing substantially every year both in numbers and in global reputation.

The sport also has a positive impact on the lifestyle of those children and adults who become involved with this athletic pursuit.

This year saw the very first IronKids junior triathlon event which was held at Thanyapura Sports and Leisure Club (TSLC) with 90 young athletes swimming, biking and running into a sporting discipline that promotes healthy living and camaraderie.

Following the success of the first IronKids event, an increasing number of Thai parents and schools have expressed interest in having their children participate in the event.

In response to this interest, Claire Ratcliffe, race director of TSLC IronKids Phuket, has implemented a “grass roots” program which is designed to encourage and benefit children who take up the sport of triathlon.

“We would like to see as many young Thai children have the opportunity to join sporting events, and through this program we may find talented youngsters that could become successful athletes in the future,” Claire told the Gazette.

“For this program to work and continue working, we need support from the local community and to this end we have designed a Corporate Sponsor Program,” added Claire.

As a result of Claire’s initiative, 70 children from the North Phuket Schools (Thalang area) want to join the upcoming Ironkids Phuket race which will be held on December 3.

“To make this possible, we are asking for seven corporate businesses to sponsor 10 children for the race. Sponsors will have their logo and the name of the sponsored school on a banner at the team check-in area and a trophy will be awarded for the best three teams,” said Claire.

The package costs 20,000 baht and those interested in helping with the program are asked to contact Claire as soon as possible.