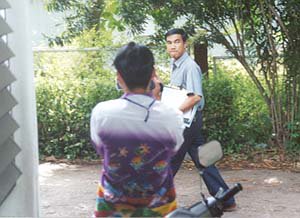 PHUKET TOWN: Crime Suppression officers and Forestry Police today descended on the Phuket Provincial Agriculture Land Reform Office (ALRO) as part of investigations into the SorPorKor land use scandal. During the afternoon investigators also visited five pieces of land that are among those pinpointed in the massive land probe launched by the government. During a tense two-hour visit in the morning, the officers questioned ALRO Acting Chief Surat Wasinwanthana and other officials, and seized documents. K. Surat, 50, from Phitsanulok, and five other officers have been ordered to report to the Agriculture Land Reform Office (ALRO) in Bangkok on Monday to face questioning about their ineptitude and their possible involvement in the SorPorKor land title scandal. The order, issued by Deputy Agriculture Minister Newin Chidchob, named the five other officers as Itthichai Onbannasil, a Level 6 official; Niyom Daengchaisri, Level 5; legal officers Kraijak Sukkeua and Niwat Thongsriprai; and surveyor Seree Boonkayai. One of the five, asking not to be quoted by name, told the Gazette, “I’m very sad about what’s happening. We have families and we have children studying in Phuket. I don’t know why this is happening to me. I haven’t been directly involved in any of this.” K. Surat, wearing an APEC baseball hat and sunglasses to hide the tears in his eyes, initially tried to avoid reporters but, when confronted, said, “I’m worried about everyone. I’ve already told the police everything I know. Now it is up to them what happens next.” He added that Surasak Saeng-aram from the Chumphon ALRO had arrived to take his place temporarily, until a permanent replacement is appointed. In the afternoon, K. Surat and K. Surasak accompanied some 40 investigators to visit five pieces of land – the upmarket Samsara property development south of Kamala, two plots of land in the Tri Trang area, one next to Yanui Beach, and one piece of farmland near the PS Hill development, south of Patong. Investigators used GPS equipment to survey the land and took photographs. Pol Maj Gen Pansiri Prapawat, Deputy Commissioner for General Investigation, said, “We have identified many pieces of land that appear to have been wrongly handled, particularly pieces of land that had SorPorKor or SorKor 1 papers but which had been converted into NorSor 3 or Chanote, or were in the process of being converted.” He declined to say which officials were suspected of improper handling of these land documents, explaining that he must first report his findings to his superiors. When asked whether he had spoken with the land owners, he replied that he had yet to do this. “Many entries are missing from the land registers at the ALRO and the Phuket Provincial Land Office [PPLO],” he noted, “and most of the missing entries seem to relate to pieces of land that have questionable titles. The new Chief of the PPLO will report these missing entries to the police.” St John Mackay, Communications Officer of Asia Island Homes, which is developing Samsara, told the Gazette, “We support the investigation. With regard to that title, we’ve had it independently checked three times, but if it’s been fiddled with in the past and nobody knows about it, then there’s nothing that we can do.”