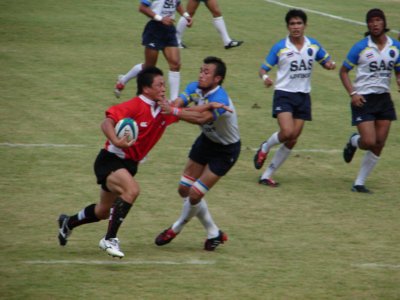 PHUKET CITY: Back after a one-year hiatus because of the 2006 coup, 80-80 rugby returns to Phuket November 16 – albeit downsized from what organizers had hoped would be a large-scale, international tournament.

The King’s Cup Rugby-80 tournament, ro be played at Sanaam Chai in Phuket City, will run until November 23.

Although teams from nations including Wales, England and France had expressed interest in taking part in the tourney, only four teams will compete this year: Thailand, Laos, Sri Lanka and Australia.

Pornchai Prachaniyom, chairman of the competition, said, “The Thai national team will be in action against a new team from Laos who have been playing competitively for only five years.

“The Australian side is coming from Canberra and features a number of players who have played rugby in England. The national team of Sri Lanka will also be in action.”

Games will be broadcast in Thailand by True Visions.

The matches will be played at Sanaam Chai on a round-robin basis. Play begins November 17 with Thailand facing off against Australia and Laos taking on Sri Lanka.

The tournament will culminate with the third-place playoff and grand final on Friday, November 23.

The final will begin at 7:15 pm with teams battling it out on the pitch for the tournament cup.

Keep an eye out on November 19 for the local derby, as Thailand will square up against neighbors Laos at 5:30 pm.

K. Pornchai said that he hopes Phuket will be able to host another international rugby-80 tournament.

Teams will be awarded three points for a win, one for a draw and none for a loss.

The tournament is being officially dubbed “In celebration of HM The King’s 80th Birthday, International Rugby-80 Tournament 2007”.

Rugby 80-80 involves full, 15-a-side matches in which all players must weigh not more than 80 kilograms at the start of the season and 85 kg during the season.

The weight restriction gives nations where players who are of smaller build a better chance of competing against teams who traditionally field bulkier players, such as from Australia and New Zealand.

The downsizing of the tournament from international spectacle to regional battle is to compensate for a last-minute change in venue.

The tournament was originally slated to be held at Karon Stadium, but the disrepair of the pitch left the playing surface unsafe for competitive rugby.