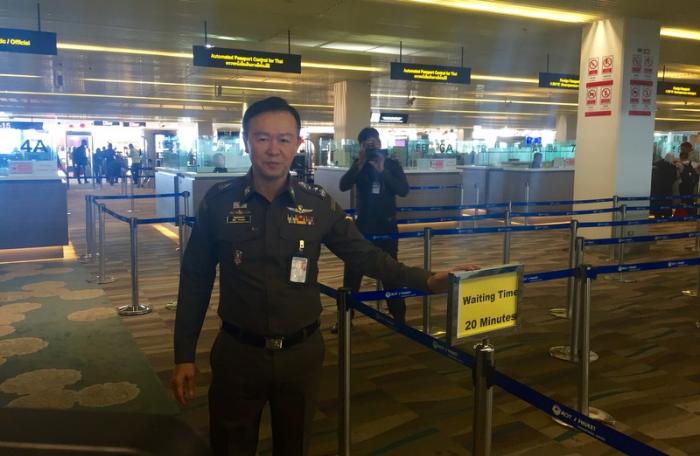 PHUKET: Phuket International Airport is now ‘fully equipped’ in terms of personnel and equipment to handle arriving and departing passengers, the Immigration Commissioner announced on Tuesday.

He added that officials have “done their best” to reduce long queues and make immigration service faster.

One of the causes of the delays was that only 13 of the 34 immigration counters in the international departure area had computers on the September 16 opening day of the new terminal.

Thirty extra immigration officers were then drafted in and all 34 counters were equipped with computers (story here).

However, despite the additional immigration officers and computers, processing of passengers was still slow, as officers awaited more passport scanners and cameras for the counters (story here).

Immigration Commissioner Nathathorn Prousoontorn announced that all required equipment has now been obtained.

“We have enough officers, computers, passport scanners, cameras and other equipment. Everything is working effectively,” said Gen Nathathorn.

“However, people need to understand that if several flights arrive or depart at the same time, there may still be a wait, despite the additional officers and equipment. We’re trying to find a way to shorten and speed up the overall process,” he added.

Gen Nathathorn said that he would meet with all relevant officials to redesign the passenger check in processes.

“There are some processes that are repeated. For instance, when a passenger enters the airport, he or she is scanned for drugs and weapons before getting in line at the airline counter. Once they have gone through immigration, they are scanned for weapons and drugs again. This process could be redesigned to save time and we are discussing what can be done in this regard” said Gen Nathathorn.